This post is one in a series highlighting the special exhibition Nightfall: Prints of the Dark Hours, which explores evocative artistic images of night, called nocturnes. The exhibition is on view through March 22, 2016, in the VMFA Works on Paper Focus Gallery. Admission is free.

The English printmaker and architect Frederick Landseer Griggs (1876–1938) was a leading artist of the turn-of-the-century British Etching Revival, whose Romantic vision of his native landscape is represented in Nightfall. A far cry from the maps and utilitarian illustrations that he produced in his early career as an architectural draftsman, Stoke Poges (1918) is a love letter to the living history of England and to etching, the artist’s preferred medium. * Stoke Poges was the village where the English Poet Thomas Gray’s Elegy Written in a Country Churchyard was set. 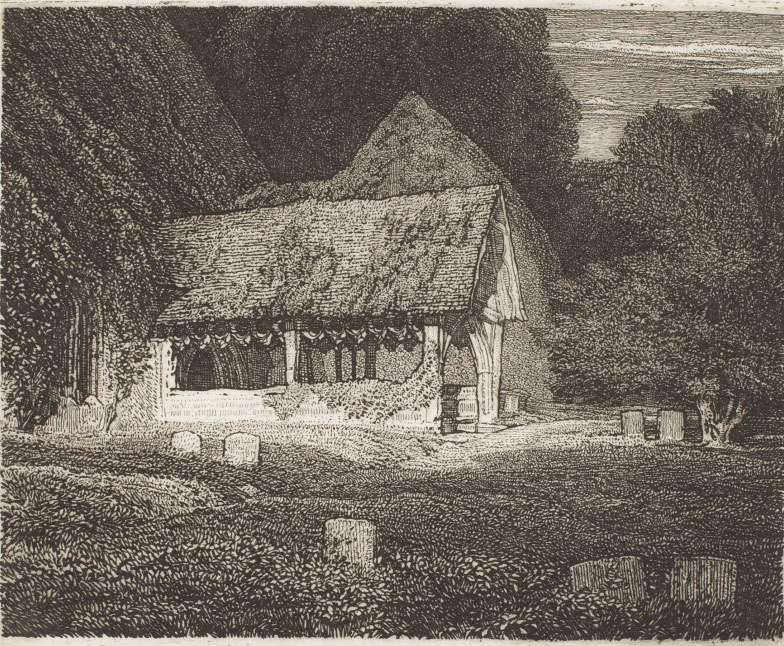 The church depicted is in Buckinghamshire town, west of London. Founded before the Norman conquest of England (1066 AD), this town has long been revered as a sort of relic of an authentic English history. In formal terms, this print glorifies the building shown for its modesty. In the wake of World War I, the shingled roof, plant overgrowth, and scattered tree growth evoked to revival etchers a much-yearned-for return to the mythic pastoral England of the past.

Griggs, along with his contemporaries Frank Short, Muirhead Bone, and William Strang—all of whom are featured in Nightfall—viewed etching as a creative, highly expressive medium and used it in a painterly manner following the tradition of Dutch etcher Rembrandt van Rijn (1606–1669). These British Etching Revival artists were responding to the widespread conception of printmaking as strictly a reproductive practice, an idea that sprung from the Victorian-era usage of engraving to make affordable reproductions of popular paintings.

In Stoke Poges, Griggs seamlessly synthesizes his artistic, religious, patriotic, and philosophical influences. Through Griggs’s vivid usage of the medium, this etching creates in the mind of a viewer the image of an ideal England of old.