How do we use our bodies to tell our story? On Thursday, July 17, 6:30 – 7:30 pm, Dr. Sarah Eckhardt, Assistant Curator of Modern and Contemporary Art moderates a powerful discussion between artists Sonya Clark and Robert Pruitt, whose work is currently featured in Identity Shifts, about the shifting ideas of culture, history, and the human body.

Here’s a sneak preview of their conversation:
Sarah Eckhardt: How would you describe your work? 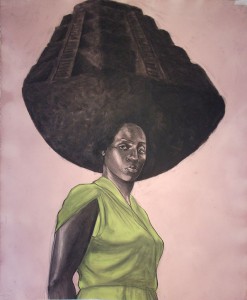 Robert Pruitt: My work has been focused on black identity, which is too simplistic a label, but it is a placeholder for now. Blackness is perceived in very limited ways, specifically in the United States. I want to open up that meaning.

Sarah Eckhardt: How does Steeped fit into your larger body of work?

Robert Pruitt: In this particular image, the stepped pyramid was a choice I made to introduce a culture into my

work that was new and unfamiliar to me. It is a shift in how I think about identity. I make images that use all kinds of adornment to express history, culture, and ideology. Recently I have been trying to bring in symbols that come from cultures outside my own. Rather than allowing Eurocentric cultures to be the one reading of world history, I am connecting black culture to Japanese and South American cultures, and other traditions. I am making my own versions of a type of solidarity between these cultures and their histories, as opposed to what might be conceived as the dominant Western narratives around culture. 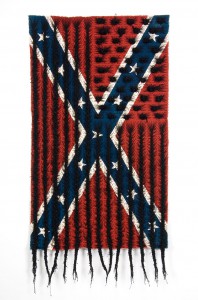 Sonya Clark: It is very connected to VMFA. To celebrate the reopening of the museum after the expansion in 2010, Amie Oliver invited Richmond artists to respond to a piece in the museum’s collection for the 1708 Gallery show Reflections and Collections. I chose Eastman Johnson’s 1862 painting A Ride for Liberty–the Fugitive Slaves. As a black woman from the North who had recently moved to the South, I was reflecting on the complicated ways that American and Confederate histories coincide. Black Hair Flag was my way of processing things like the Confederate flag that was still hanging on the Confederate Memorial Chapel outside of the museum. Also, Governor McDonnell had just declared April as Confederate History Month with no mention of slavery or the contributions African Americans have made to the culture and wealth of our nation. These events coalesced as a call, and Black Hair Flag is my response.