To put it simply, the Worsham- Rockefeller bedroom is far from simple. This lavishly adorned room resided in the New York home of Arabella Worsham. When she went off to marry railroad magnate Collis P. Huntington, she sold her home to the Rockefellers. Seeing that the room was a true model of late 19th century decorative arts, the family donated it to the Museum of the City of New York. In 2008, the Museum of the City of New York was ready to deaccession, or remove the room and all of its pieces from its collection. As if by fate, the VMFA was in the midst of an expansion project and were able to find a place in its new American art wing to install it. The room now serves as a magnificent showcase of the illustrious interior design of the Gilded Age. 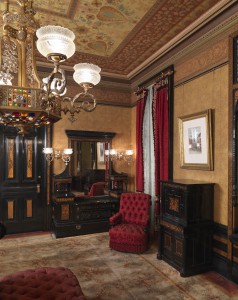 From 1870 to 1900 America saw a surge of industrialization and economic prosperity. Big business turned middle class merchants into tycoon bankers and businessmen. Those who ended up on the very top rungs of the social ladder wanted to ensure that no one would underestimate their wealth. The driving theme of this time period was prosperity, wealth, and most of all, gold. The time period began to be known as “The Gilded Age,” a term coined by American authors Mark Twain and Charles Dudley Warner. The Worsham-Rockefeller room is an excellent example of a Gilded Age interior. The room shows a few aspects of earlier Victorian decor while also sticking with the grandiose taste of the time.

Interesting Facts about the Huntington Family

Where Has the Room Been?

Story of the Worsham-Rockefeller Bedroom

Conservation of the Worsham-Rockefeller Bedroom