Interviewer: Who was Caligula?

Educator, Courtney Morano: Caligula was a Roman emperor. He was well before Septimius Severus [reigned 193 – 211]. Caligula ruled from 37 to 41. He’s part of the Julio-Claudian family, which essentially were the first five emperors of Rome, so from 27 BC to A.D. 68.

Curator, Peter Schertz: Caligula was the third emperor of Rome. Within four years he turned people off so much that his own guards assassinated him.

Interviewer: Where exactly was the statue found?

PS: We used to think that it was found near the Theatre of Marcellus, one of the major architectural buildings of Augustan Rome, but we now know due to recent archival research that he was found at an imperial sanctuary outside of Rome in a place called Bovillae. He was found in 1823 [sic; actually, 1825].

Interviewer: What are some of the components of the piece?

CM: You know, what’s he wearing? Get back to the clothing. He’s wearing a toga, and under that he wears a tunic, which is like a T-shirt kind of garment. And then he’s got these patrician boots.

Interviewer: Why is the statue important to the VMFA?

CM: There are only about fifty images of Caligula, and we have one of only two full length sculptures of Caligula in the world, so that’s pretty impressive. The other fifty are busts or just portrait heads. 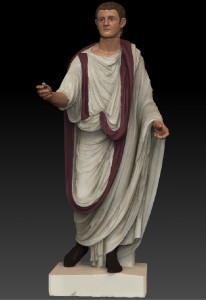 Caligula’s statue combines Roman realism with Greek idealism. His portraits followed the influence of the Augustan age and resemble those of other members of the Julio-Claudian family. He is adorned with a high-born citizen’s toga, senatorial shoes, and positioned on a scrinium. We believe his arms would have been positioned in a rhetorical gesture. One of only two full size statues in the world that still exist of Caligula, the figure was carved from a single block of Parian lychnites marble, the most highly prized marble in antiquity. The statue was discovered in 1825 on lands belonging to the Colonna family of Rome and was later displayed in a residence in the Theatre of Marcellus in Rome. The Virginia Museum of Fine Arts has been in possession of the piece since 1971.

The sculpture is cut from a single block of marble, but the head was found separately from the body and was reattached, probably by the 1840s, which lead some scholars to question whether the head and body belonged together. The damage to the face, hands, and foot of this sculpture indicates that it may have fallen over at some point. The chisel marks visible on its neck are probably from the nineteenth restoration of the statue.

In 2010, a National Endowment for the Humanities grant was given to the University of Virginia and VMFA to undertake new studies on Caligula. The goal was to create a 3D model of the statue and study its ancient polychromy (paint). The project’s goal was both to explore how digital technologies can help people experience and study three-dimensional objects when they cannot physically see them and to develop models of how this statue of Caligula looked in antiquity. More broadly, the aim of the project aimed to understand the cultural significance of this statue and Caligula’s reign in both antiquity and the present, the previous conservation of this statue, and create a digital restoration of the statue’s original appearance. As the first step of this new study, the team created a 3D model to capture what the statue of Caligula currently looked like followed by a detailed examination of the statue’s surface for traces of polychromy, the ancient pigments that were used to color the statue. This technical study revealed new insight into previous restoration presumably done in the mid 1800s, according to the “1843” engraving on Caligula’s left arm. Photo-induced luminescence examination revealed traces of ancient polychromy, which turned out to be a compound of Egyptian blue (a man-made pigment) and pink madder lake (an organic pigment). Mixed together, these pigments produce purple, a significant color in Roman culture beginning perhaps as early as the Regal Period in the eighth century BCE and continuing through the Imperial Period. On the basis of these findings and comparison with other ancient statues and paintings, the team was able to create different variations on how the Caligula statue might have looked during the 1st century. After this research was complete, curator, Peter Schertz wanted to find out “whether the head and body of the statue are from a single block of marble and if conservators could reposition the head.” These two main questions led to the most recent conservation campaign of Caligula.

Several quarry locations in the Roman and Grecian areas. 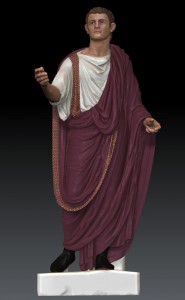 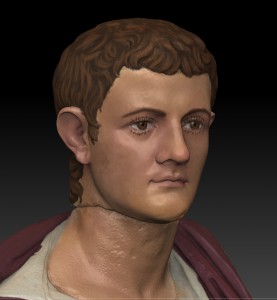