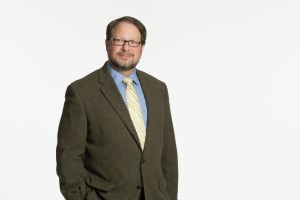 VC: My name is Virginia Chambers and I am here with Peter Schertz, the Jack and Mary Ann Frable Curator of Ancient Art. And we are here to talk about Caligula today.

VC: Could you tell us, who Caligula was?

PS: Caligula was the third emperor of Rome. He was more often known as princeps. He was the great grandson of Augustus, the founder of the Roman Empire. He was a very young man when he became emperor; he was met with great cheers of admiration by the people of Rome. But, within four years, he turned people off so much that his own guards assassinated him.

VC: Where exactly was this statue found?

PS: We used to think it was found [in Rome], which is one of the major architectural buildings of Augustan Rome. But, we now know due to recent archival research, that it was found at an imperial sanctuary outside of Rome in a place called Bovillae. It was found in [1825]. We formally acquired in 1971, but discussions began prior to that.

VC: Who gifted the work?

PS: It was a purchased from a Swiss dealer. The statue was examined by a leading scholar in 1968, and more or less, when we acquired him – I am not quite sure of the chronology, if we acquired him first and then had him conserved or if he was conserved while we were making the acquisition – but, more-or-less that time, it  [the head] was removed and re-positioned.

VC: Why was the statue’s head removed?

PS: Well, if you had a statue of Caligula – wouldn’t you want to take off his head? That was the thing to do with Caligula statues! But, no, why we removed the head, or why it was removed – when it was found in the 18th /19th century, a number of restorations were made to the statue. You can still see the remains of them [points to the lower, left hand corner of the statue’s toga]. That’s where that marble had been damaged and they tried to complete it with additional pieces of marble. In the 18th/19th century they also attached the head – it was felt that the head was misaligned, so in 1970, more-or-less, they decided to try again to correct it.

VC: Is realignment, or “fixing,” common among ancient statues?

PS:  A lot of people loved the idea of the fragment – but, that is fairly new. That is maybe mid 19th century. Prior to that they [collectors] wanted a complete statue that is part of the reason why many people thought that the head did not belong to Caligula. Because it clearly had been broken off, it looks different from the rest of the statue, and also because, not only was Caligula assassinated, but he was so hated by all of the Roman Empire, more or less, spontaneously, virtually every image of Caligula was destroyed. So there are very few images of Caligula left.

VC: Are there any paintings of him left? Not, just statues?

PS: No, not paintings. There are coins, but surprisingly few of them – which indicates that they were melted down. There are several dozen-portrait heads, including a couple that have been re-carved as likenesses of later emperors, but you can see that the portrait heads had been Caligula. But, there is only one other statue of Caligula that survived intact, that is on the island of Crete. It is not as well made as this sculpture.

VC: Why did the museum decide to take on new technical studies of this statue?

PS: Well, it was an interesting process because, we were approached by a scholar at the University of Virginia [Prof. Bernard Frischer, now at the Indiana University], who asked if we would be interested in applying for a collaborative grant to make a 3D model of Caligula. And that sounded cool, but I said, “As long as we are doing this, can we do other things with this?” You know it is a great deal of expense, studying ancient statues, and sort of positioning grant applications to be successful, so what about looking for traces of polychromy – ancient color. Looking for traces of ancient color, we looked at the statue and thought “The sculpture has clearly been very carefully cleaned in the past,” but with all these deep channels in the folds and the drapery we were quite optimistic that we could find traces of ancient color because we know that this, like every other ancient marble statue, had been painted.

VC: Why is the painting such an important aspect to know today? Why does that affect our understanding of these sculptures?

PS: In antiquity, every marble was painted and that was part of a completed statue. An unpainted statue just wasn’t a full statue. There are stories about quite famous sculptors who said, their best works were ‘such and such a statue’ because ‘so and so’ painted it. So that is a sculptor saying the paint is really the finishing to the whole of my statue, not just one part of making it. And for our purposes, almost none of the statues have visible polychromy on it now, even when there is some, it is very spotty. There won’t be a stripe [of color] visible on the rest of it. It really changes our understanding of the sculpture to see it in color. Caligula had threatened to put another sculpture of himself in a temple in Jerusalem – this is a Jewish temple where you are not supposed to bring images – there was practically a Jewish revolt over it, because it violated their sacred laws. And when you see it painted as you see in the labels, the construction of the painting you can understand their anxiety about this conflation of the human and the divine that the Romans were quite comfortable with, but the Jews of antiquity were distinctly uncomfortable with.

VC: Did the test that was performed on this Caligula confirm what you had thought about polychromy, or were there any surprises?

PS: We did find traces of polychromy, which is great, but they were two tiny specs. We were quite optimistic that when we looked at the surface, we would find a great deal of many traces. But, to find two tiny specs after all of our very careful examination (it took about a full day), was a disappointment. But, the good news was that the specs contained a mixture of Egyptian blue – that is a type of pigment that appears in Egypt around the year of 1500 BCE – so long before the Romans – and pink lake madder, that is organic substance that was used, and still is used, for pigments now. And of course when you mix a sort of blue with red it makes purple. For Romans, purple was a very, very important color. A senator would wear a toga with a purple stripe to indicate his rank and [purple] was a sign of prestige.

VC: Did polychromy help with the dating process?

PS: No, we already knew when Caligula lived. The chronology of the roman emperors, especially the early emperors was well established. Given the quality of the carving and his maturity, we know that it was made during his very brief reign somewhere during [those] four years.