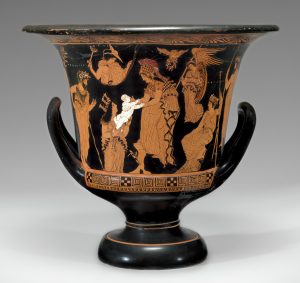 The Classical Past: Greece

Why do we remember the glory that was Greece? This resource illustrates and investigates the countless ways that the art, literature, language, and traditions of ancient Greece have inspired and guided the development of Western culture.

The Classical Past: Greece

Who Were the Ancient Greeks?

Being Greek wasn’t determined by borders. Greek colonies dotted the Mediterranean from Syracuse to Asia Minor and from Thrace to North Africa. Nor did Greeks citizens belong to a single political state—Greece was made up of fiercely independent city-states and loosely connected colonies. Language was what set them apart. To be Greek meant to speak Greek.

Greek mythology and legends often recall the cultures of the late Bronze Age (1600-1100 BC) such as that of the Mycenaeans, whose warriors inspired the stories about the Trojan War. The people now known as the ancient Greeks emerged following a dark age of cultural decline that ended about 900 BC, just as the brilliant Hellenic civilization began to develop. Over the next eight centuries, the Greeks created a legacy that has inspired Western culture throughout the following millennia.

We do not imitate but are models for others. (Perikles)

Greek art, like Greek literature, political thought, science, and philosophy, lies at the heart of the western tradition. Though the Greeks freely drew from other cultures, they have provided models that many others have followed for much of the past 2500 years.

Although there were eventually over 1,000 Greek city-states, a few rose to prominence and became centers of Greek culture. 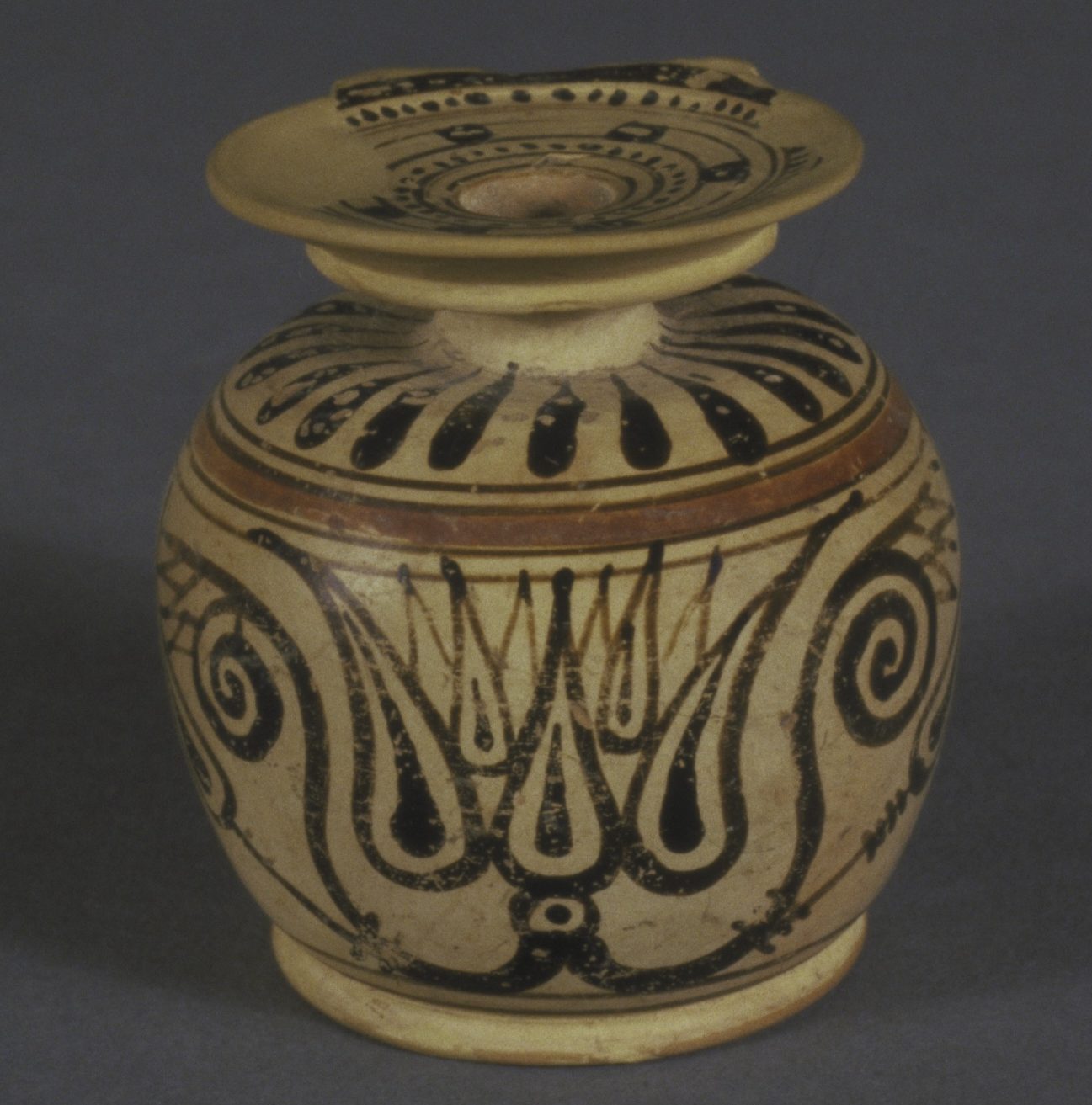 Sparta, a city-state governed by an oligarchy (rule by a few), dominated the valley of the Eurotas River in the Peloponnese (an area in the peninsula of Southern Greece just below Corinth) after about 600 BC. Although their society was stern and militaristic, Spartans also produced widely-admired lyric poetry and lovely pottery, such as this aryballos (small container) from the 6th century BC.

Named for the goddess Athena, Athens was the birthplace of democracy. Athena, adorned with olive leaves, appears on the front) of this Athenian coin (470–450 BC). An owl, associated with Athena’s wisdom, appears on its back.

Strategically placed on the narrow isthmus that connects the Peloponnese with the rest of Greece, Corinth built a wealthy, far-reaching shipping network. Its exports included beautiful Corinthian pottery such as this aryballos. 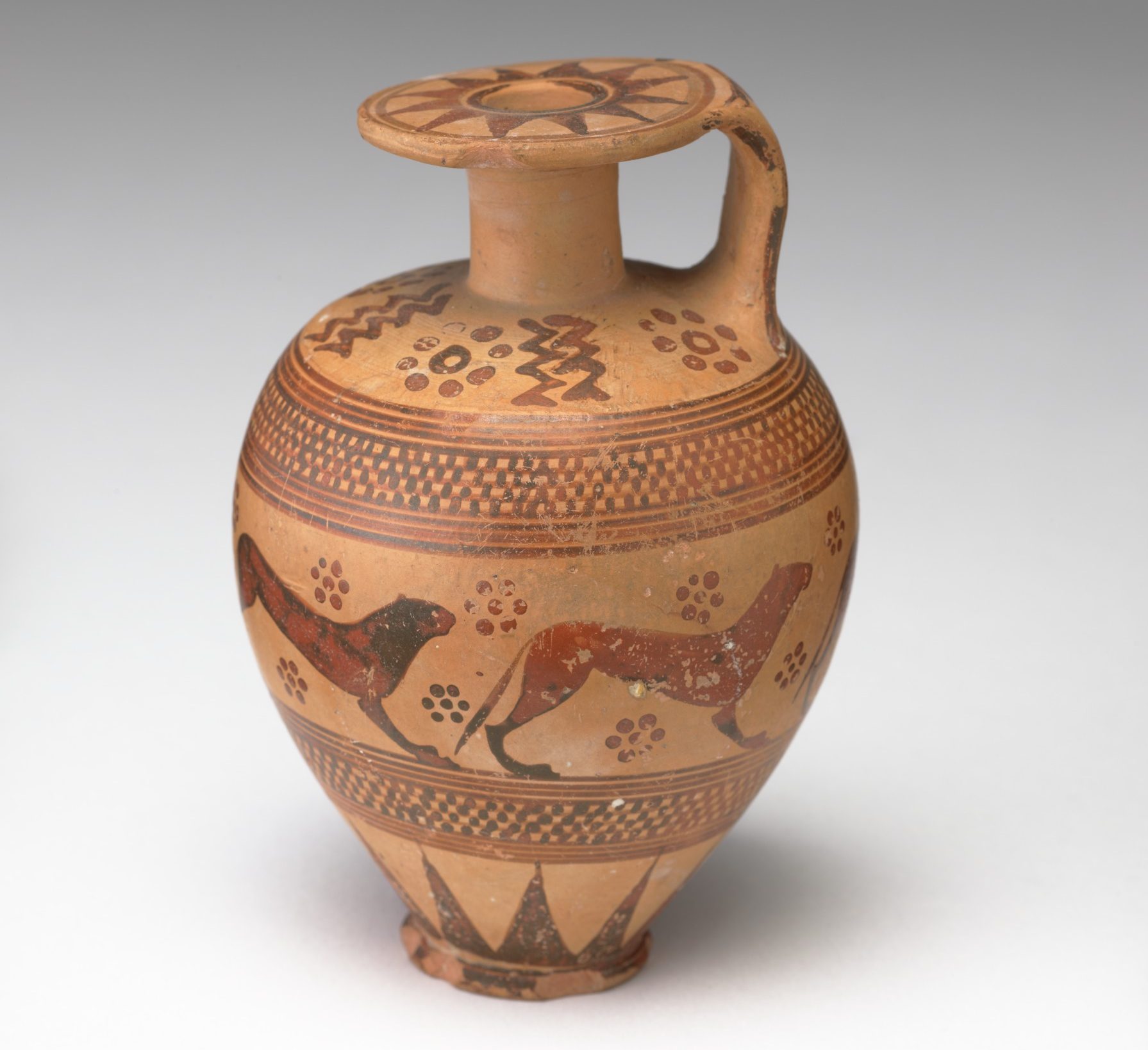 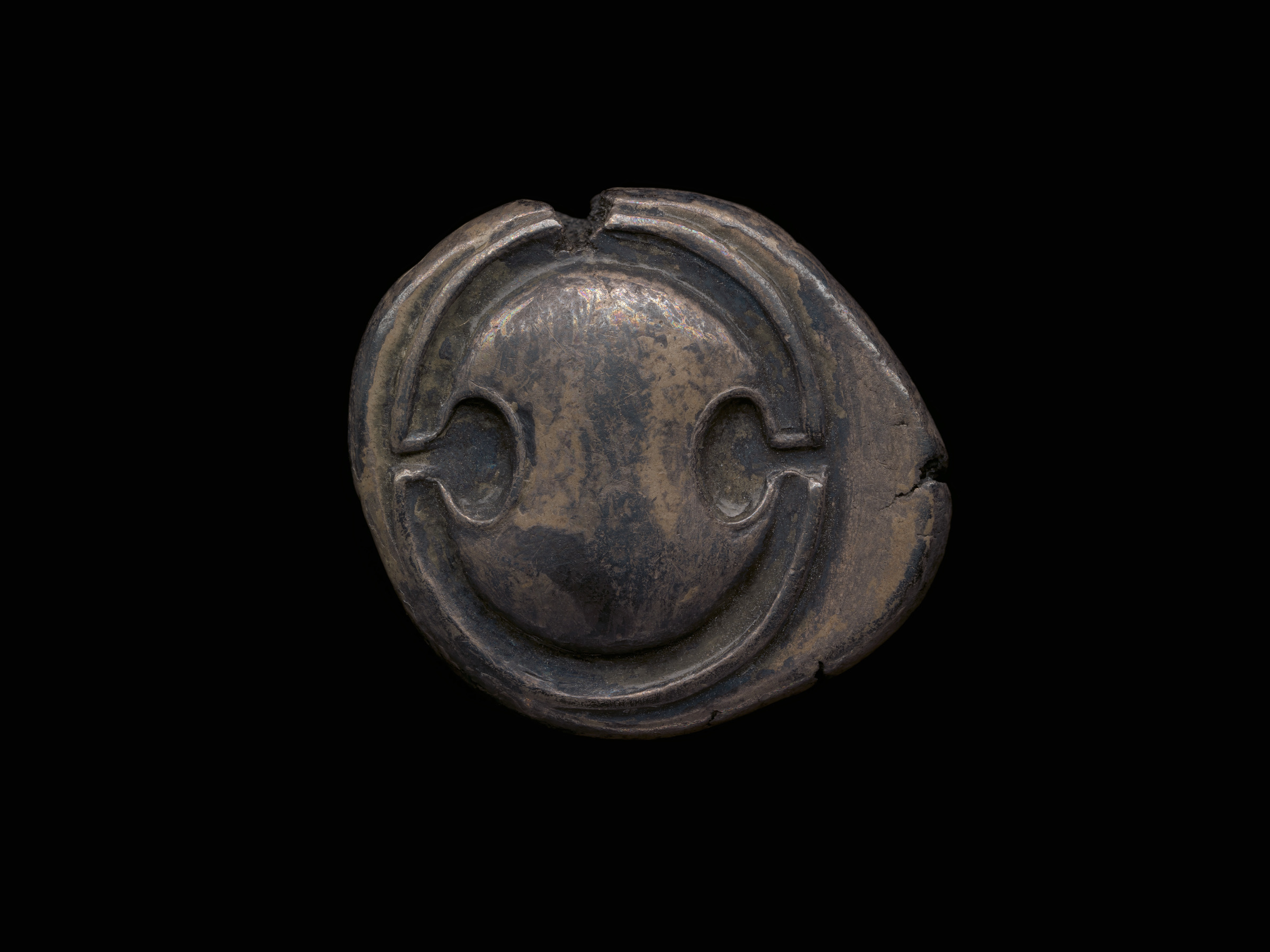 According to mythology a Phoenician named Cadmus founded Thebes, the major city of Boeotia in central Greece, by planting dragon’s teeth in the ground. This Theban coin from the early 4th century BC depicts a type of shield known as a Boeotian shield, named for the region.

A Celebration of Ideas

Greek city-states varied greatly in their essential character, their forms of government, and even in the dialect of Greek that they spoke. Many different aspects of Western culture, from architectural styles to scientific concepts, grew out of this mix of ideas and customs. One of the most important threads in this rich heritage was the emphasis given to human achievements. Greeks, particularly in Athens, celebrated the concept of the individual and the importance of freedom.

The symposium, a drinking party that included poetry and music, provided an excellent forum for exploring these new ideas and artistic creations. Surviving guest lists of symposia include the names of politicians and poets, soldiers and scoundrels—as well as the three great philosophers of ancient Greece: Socrates, Plato, and Aristotle.

The scene that appears around the top of this rhyton (drinking vessel) shows men enjoying a symposium (see detail below). 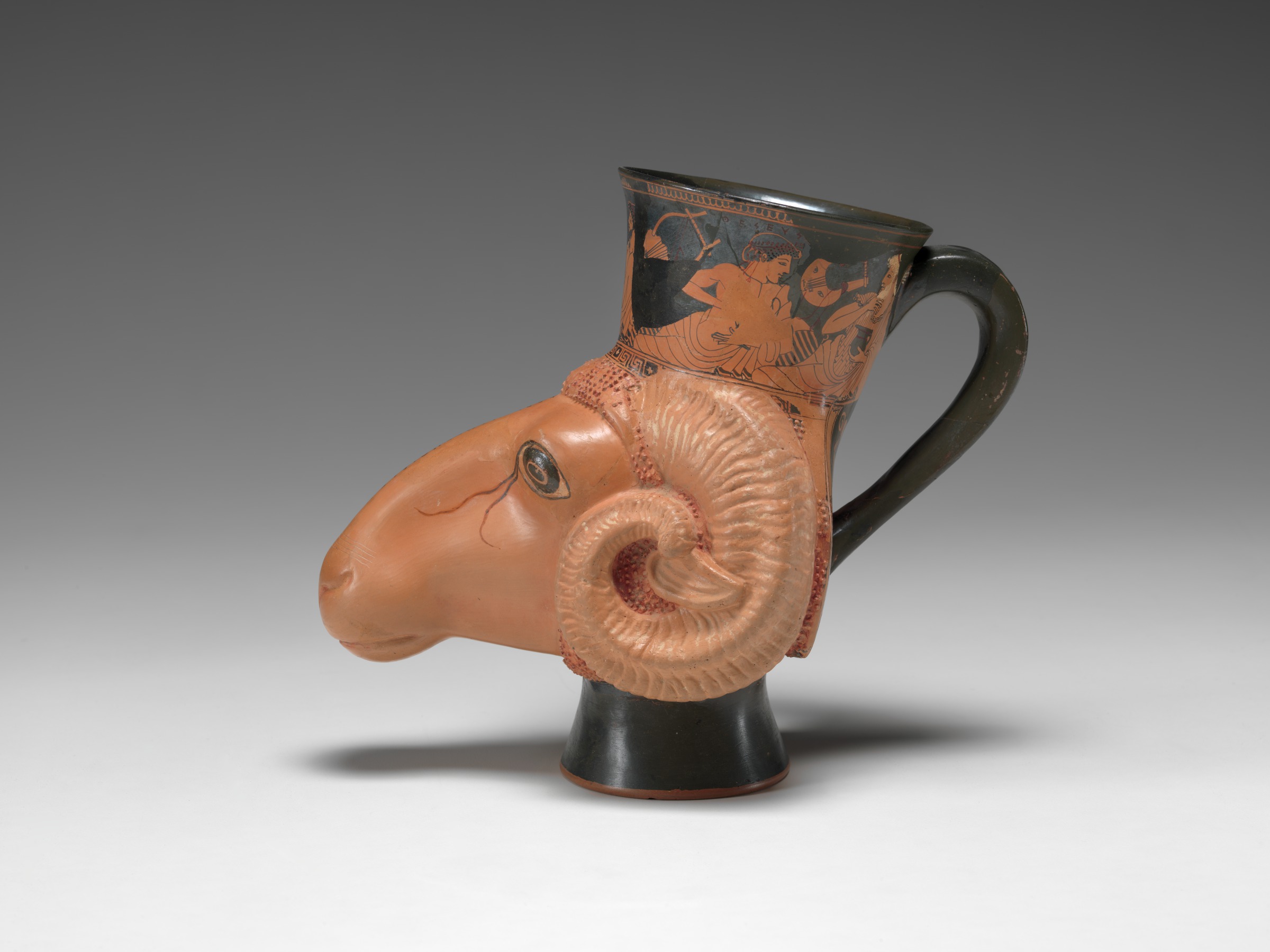 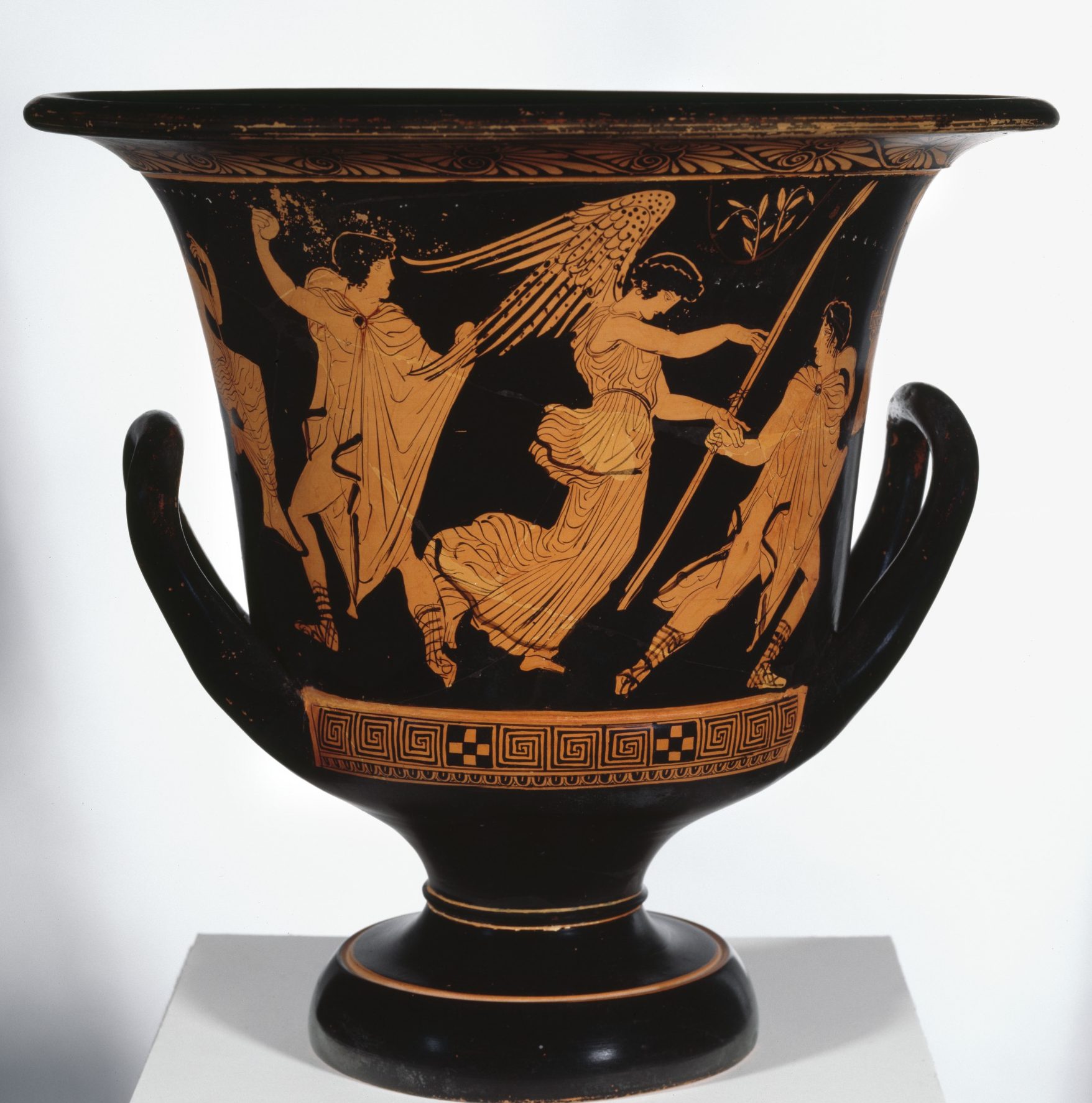 During a symposium, wine was mixed with water in vessels called kraters. This krater shows Eos, the rosy-fingered goddess of the dawn, pursuing the hero Cephalos.

Each participant at the symposium drank from his own cup, like this kylix that features eyes and a nose on the outside (at right) and the head of the gorgon (snake-headed monster) Medusa surrounded by concentric circles on the inside (image below). When drinking from this cup, it would appear as though the drinker was wearing a mask. 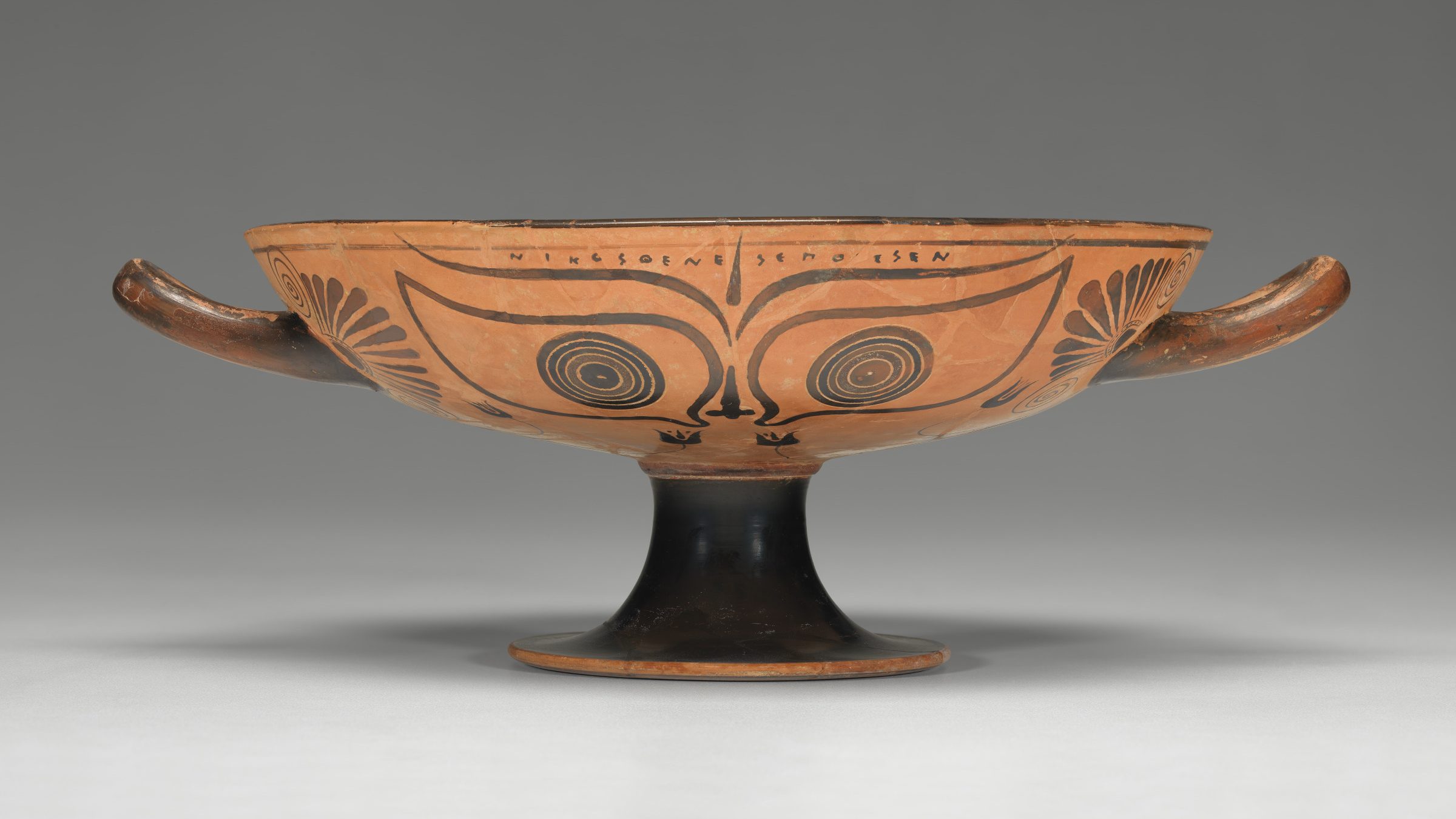 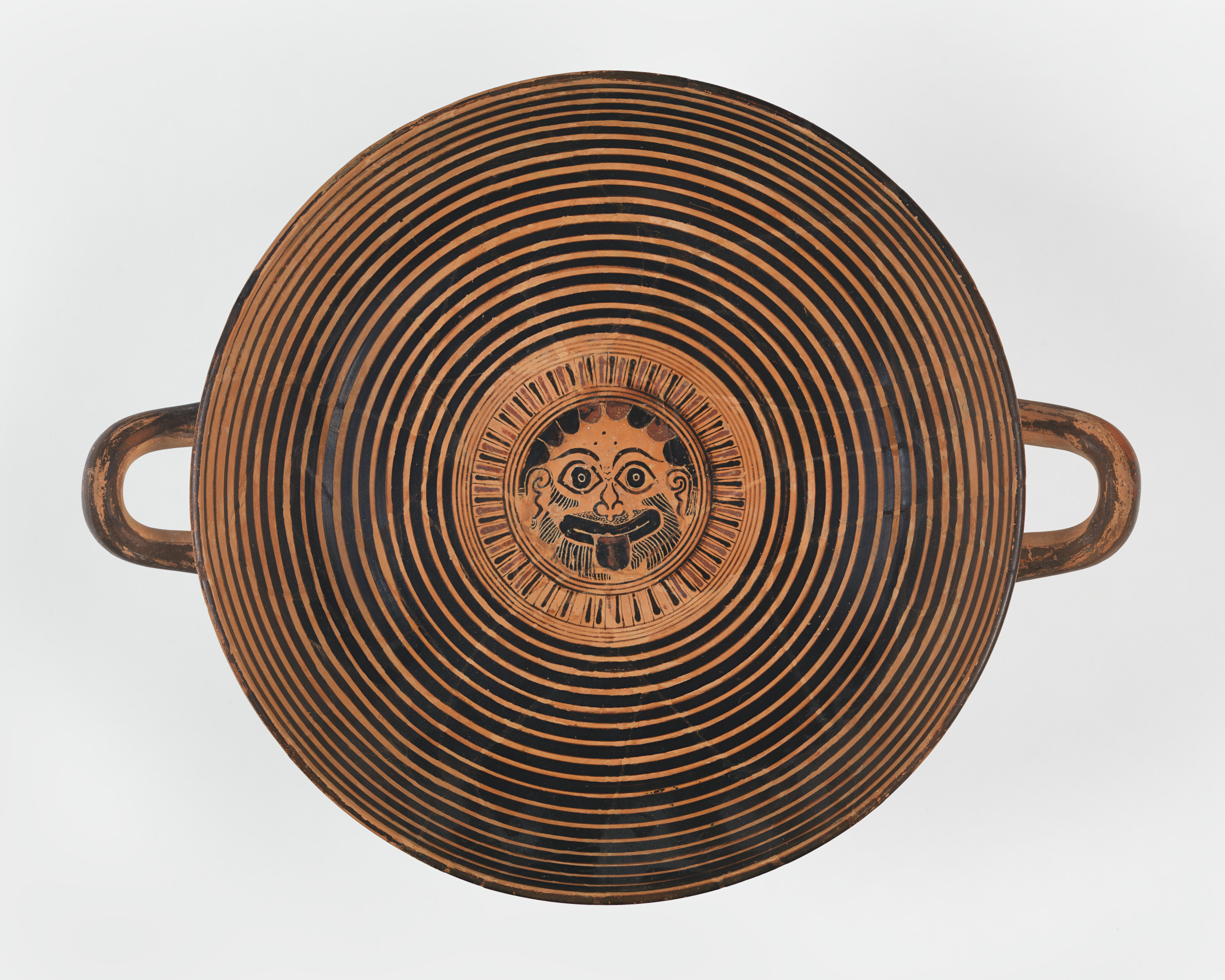 Both the eyes and gorgoneia (images of gorgons) were thought to ward off evil (detail of cup interior).

The rocky soil and mountainous terrain of mainland Greece made farming difficult, so many Greeks relied on trade and the sea. They made beautiful pottery and became master shipbuilders and traders, sailing the Mediterranean and exchanging olives, olive oil, wine, and pottery for grain and other commodities. 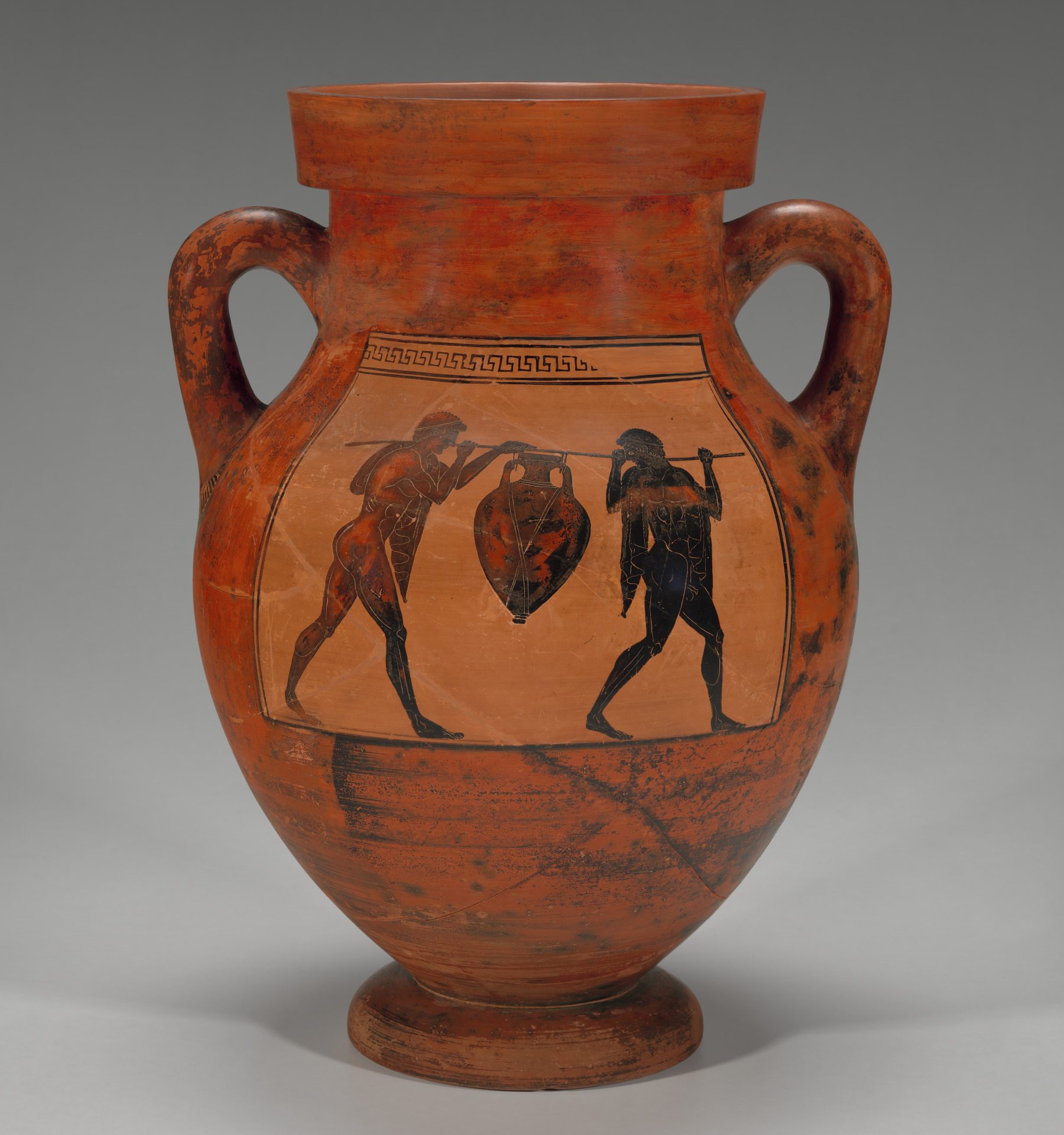 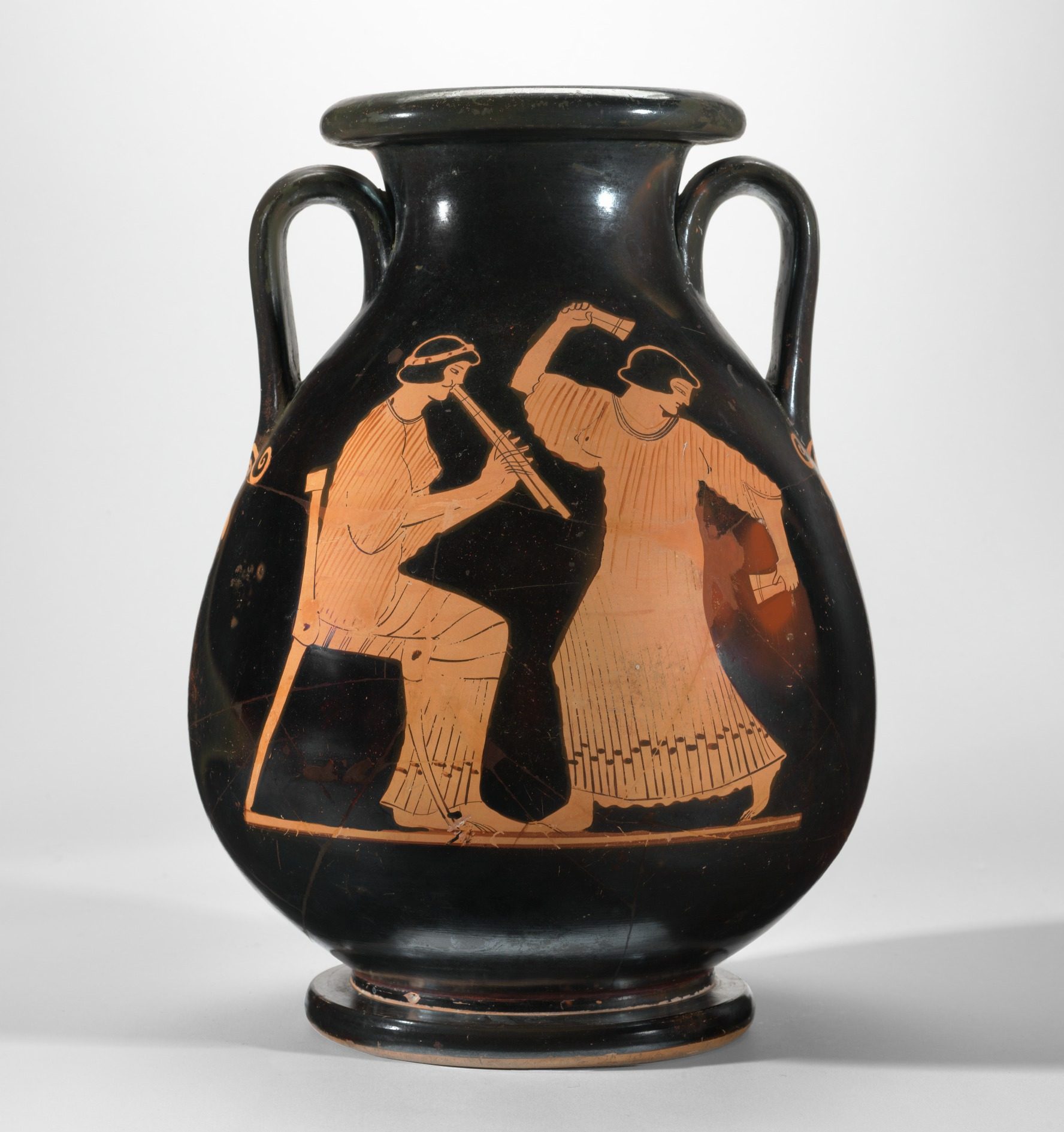 Greeks dressed in simple clothing, like the chitons worn by the women on this Red-figured Pelike (ceramic container). A cloak, such as chlamys or a himation, could be added for warmth.

Greek athletic competitions celebrated the human form, the quest for excellence, and readiness for warfare. From the time of the first Olympic Games (776 BC), which were held in honor of Zeus, Greek male citizens competed in footraces. Later, discus throwing, wrestling, boxing, and chariot racing, like the race shown on this lekythos (narrow ceramic container), were added to the games. 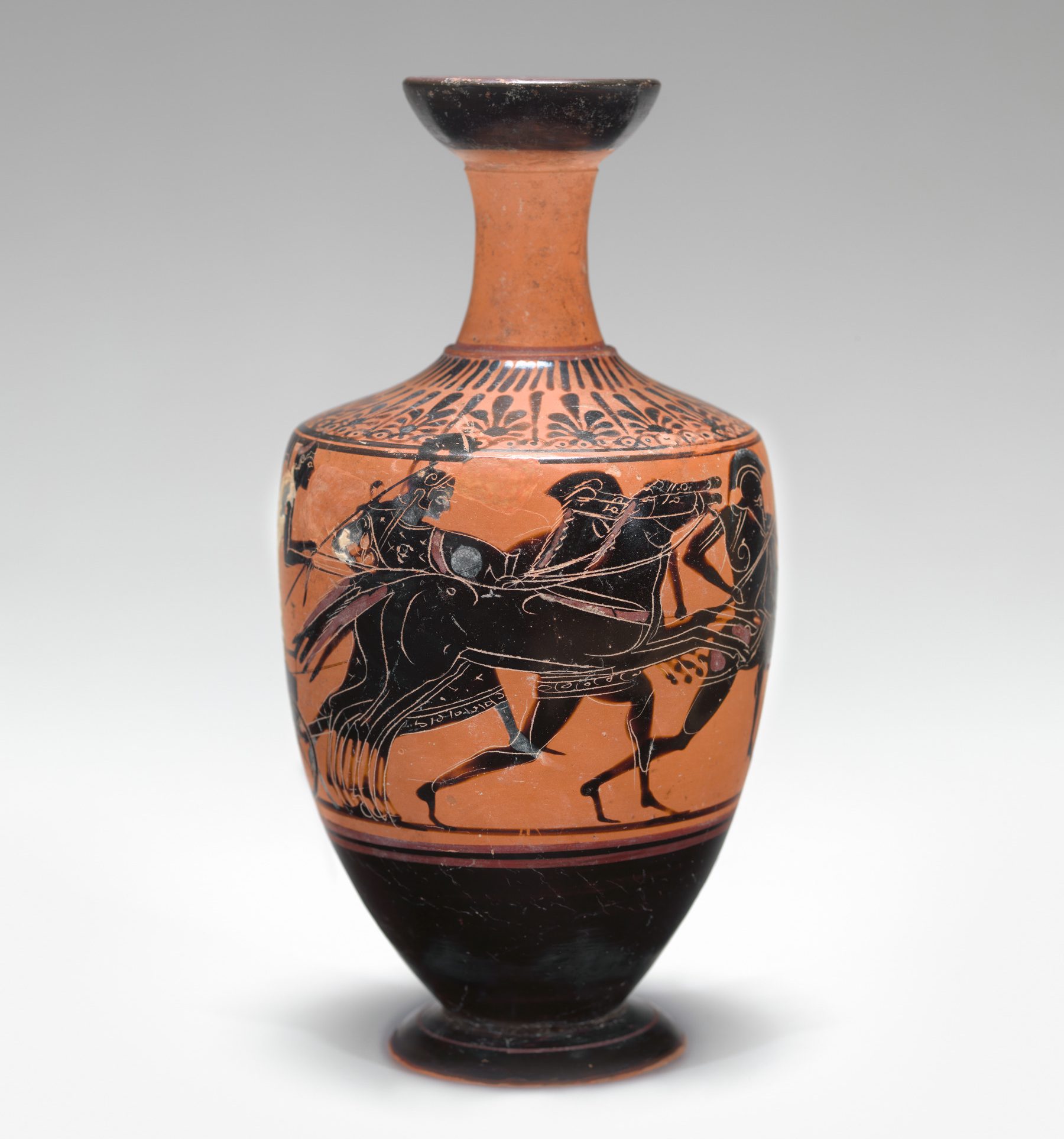 Athletes applied perfumed oils, poured from small containers called aryballoi (the plural form of aryballos), to their bodies and then cleaned off dirt and sweat by scraping their skin with an instrument called a strigil. 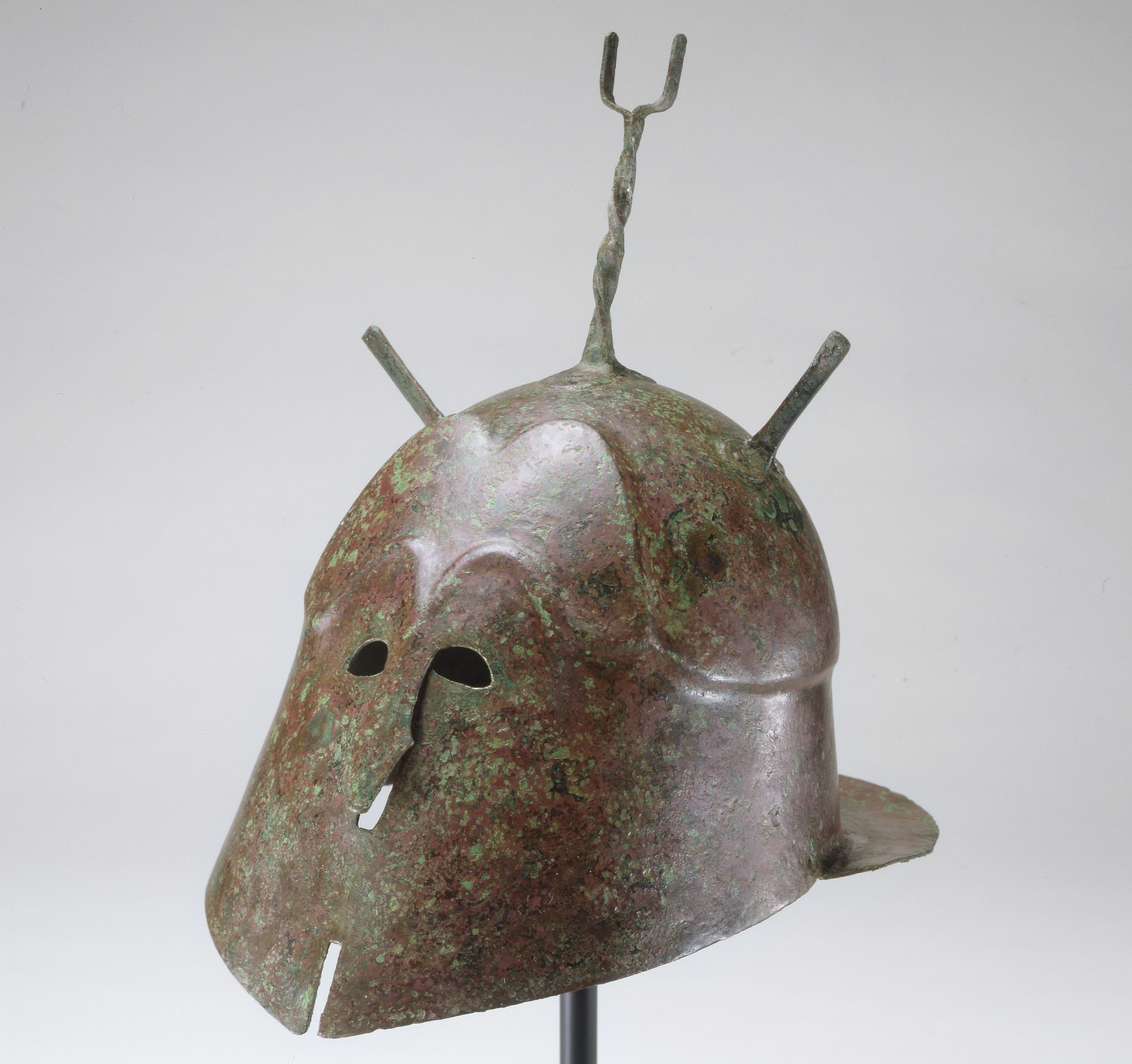 Conflicts between Greek city-states were frequent and fought by citizens who served as soldiers. Greek forces also turned back two massive Persian invasions in 490 BC and 480 BC. This bronze helmet dates from the era of the Peloponnesian War, a terrible internal conflict between Athens and Sparta that disrupted the entire Greek world from 431 to 404 BC.

This South Italian variant of a Corinthian helmet was surmounted by crests of horsehair or feathers attached to the three bronze prongs projecting from the top. The Corinthian helmet was popular throughout the Greek world because it was easily made from a single sheet of hammered bronze and hid almost the entire face of its wearer, presenting the enemy with a frightening sight.

In addition to language, ancient Greeks shared a polytheistic religion (belief in many gods) and a cultural heritage expressed first through oral poetry and later through literature.

Religious observances were made daily at household altars and local temples. Here, on the left, Apollo, son of Zeus and god of music and poetry, pours an offering of wine onto a low altar. His twin sister Artemis, goddess of the hunt, appears on the other side of the vessel, shown at right.

Much of our knowledge of Greek religion comes from ancient poems and epic cycles, such as Homer’s Iliad and Odyssey. These oral compositions, which became standardized in form around the 8th century BC, have served as the foundation for Western literature.

Although the Iliad tells the story of only the last days of the Trojan War, Greeks knew the entire story from other poems and stories. A scene on this amphora (left) shows Hermes leading Hera, Athena, and Aphrodite to the famous beauty contest known as the “Judgment of Paris.” Each goddess offered a bribe to Paris, the Trojan prince. Aphrodite won by offering him Helen, the most beautiful woman on Earth.

Unfortunately, Helen was already married to the King of Sparta. When Paris claimed his prize and sailed for Troy, ships full of Greek warriors followed. After ten years of bloody warfare, the Greeks triumphed, but behaved so badly in victory that the gods punished them with difficult trials during their journeys home. The other side of the amphora (right) shows Helen’s return to Sparta at the end of the war. 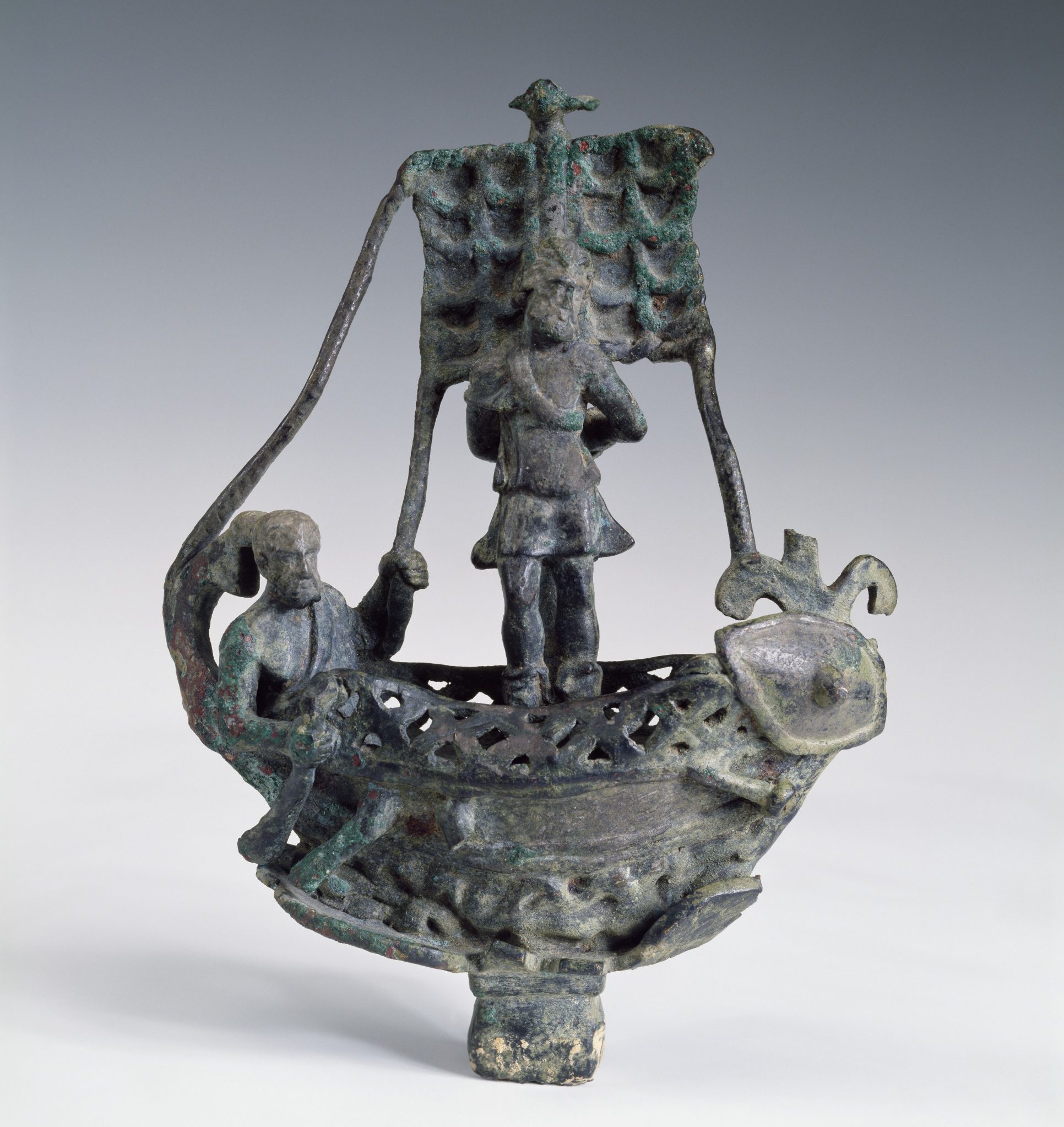 The Odyssey chronicles the tempestuous ten-year return voyage of Odysseus, King of Ithaca, from Troy. This Byzantine bronze from the 5th–6th century AD illustrates Odysseus’s encounter with the Sirens.

Both tragedy and comedy developed in ancient Athens. By the late 6th century BC, groups of tragedians (playwrights who wrote tragedies) regularly competed for prizes at Athenian festivals held to honor the god Dionysus.

Dionysus, bearded with a wreath on his head, appears in this vase painting. His companions are two maenads (female followers) and a satyr (a half-horse, half-man figure). 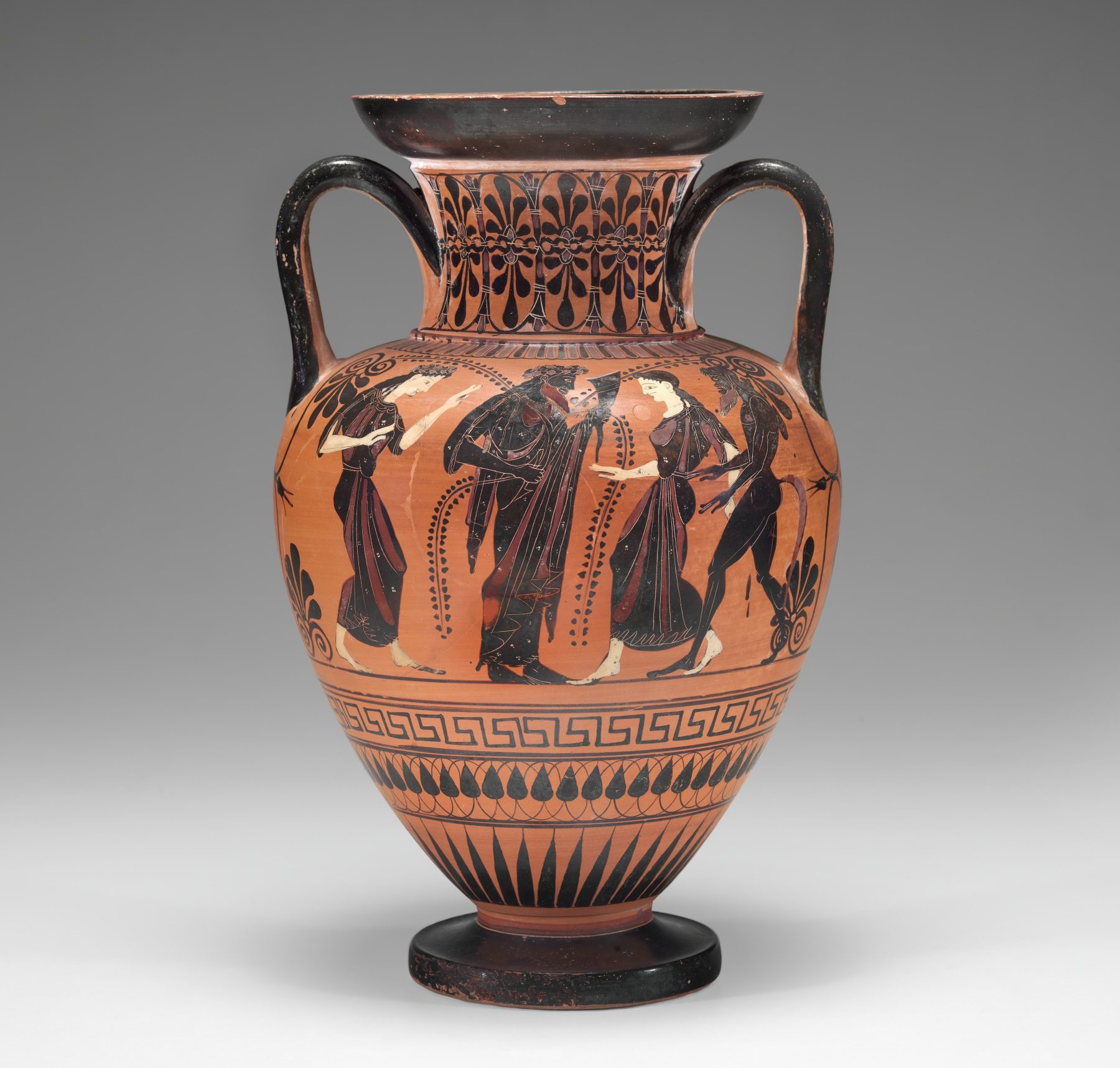 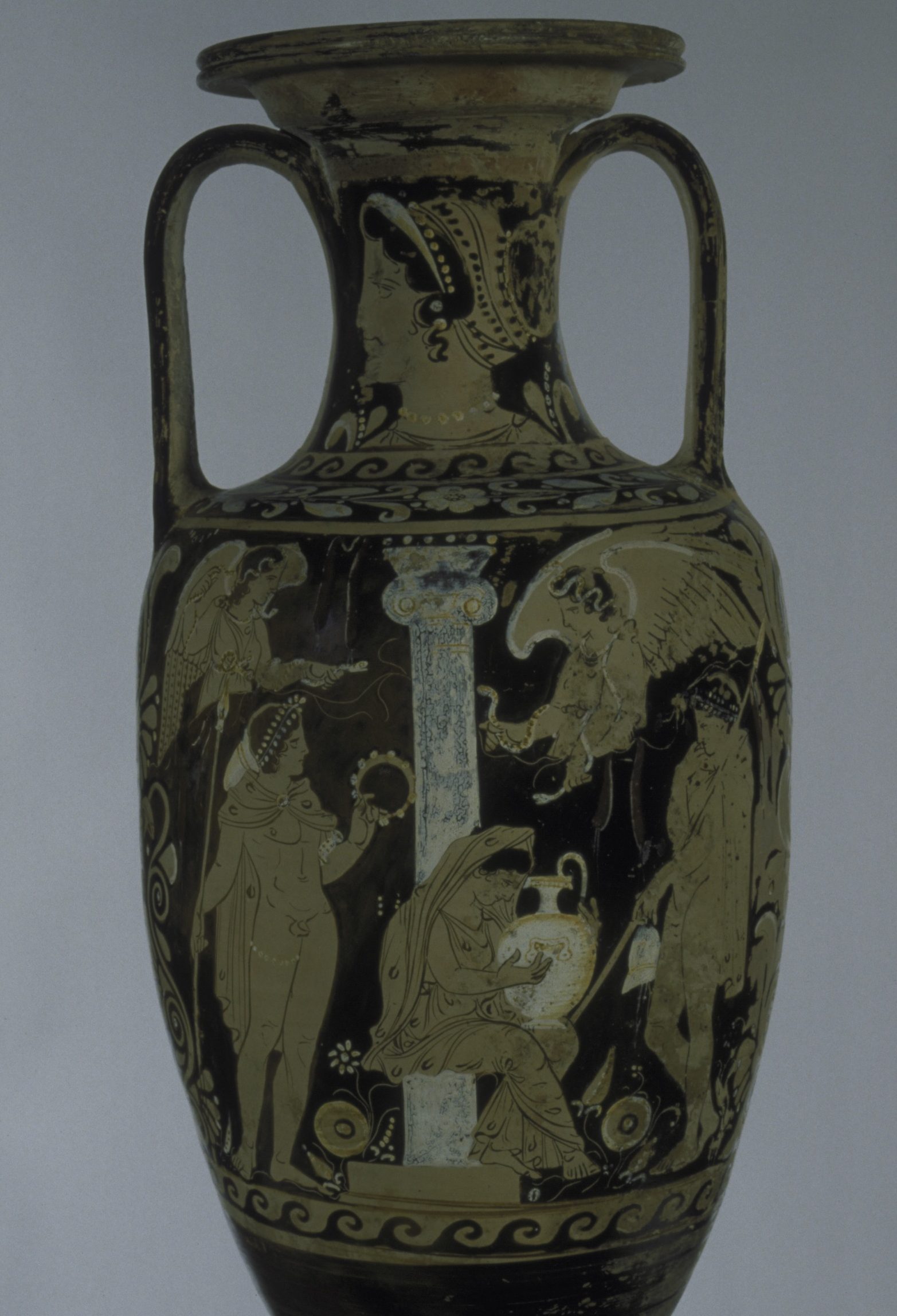 Of the thousands of tragedies written in ancient Athens, only a few written by Aeschylus, Sophocles, and Euripides have survived. This scene from The Oresteia shows Orestes and his sister, Electra, at the tomb of Agamemnon, their father. The amphora was produced by a Greek in South Italy, where dramatic performances were extremely popular.

Scholars suggest that this vase shows a scene from Euripides’ Alcestis, the story of a queen willing to trade her life for her husband’s. 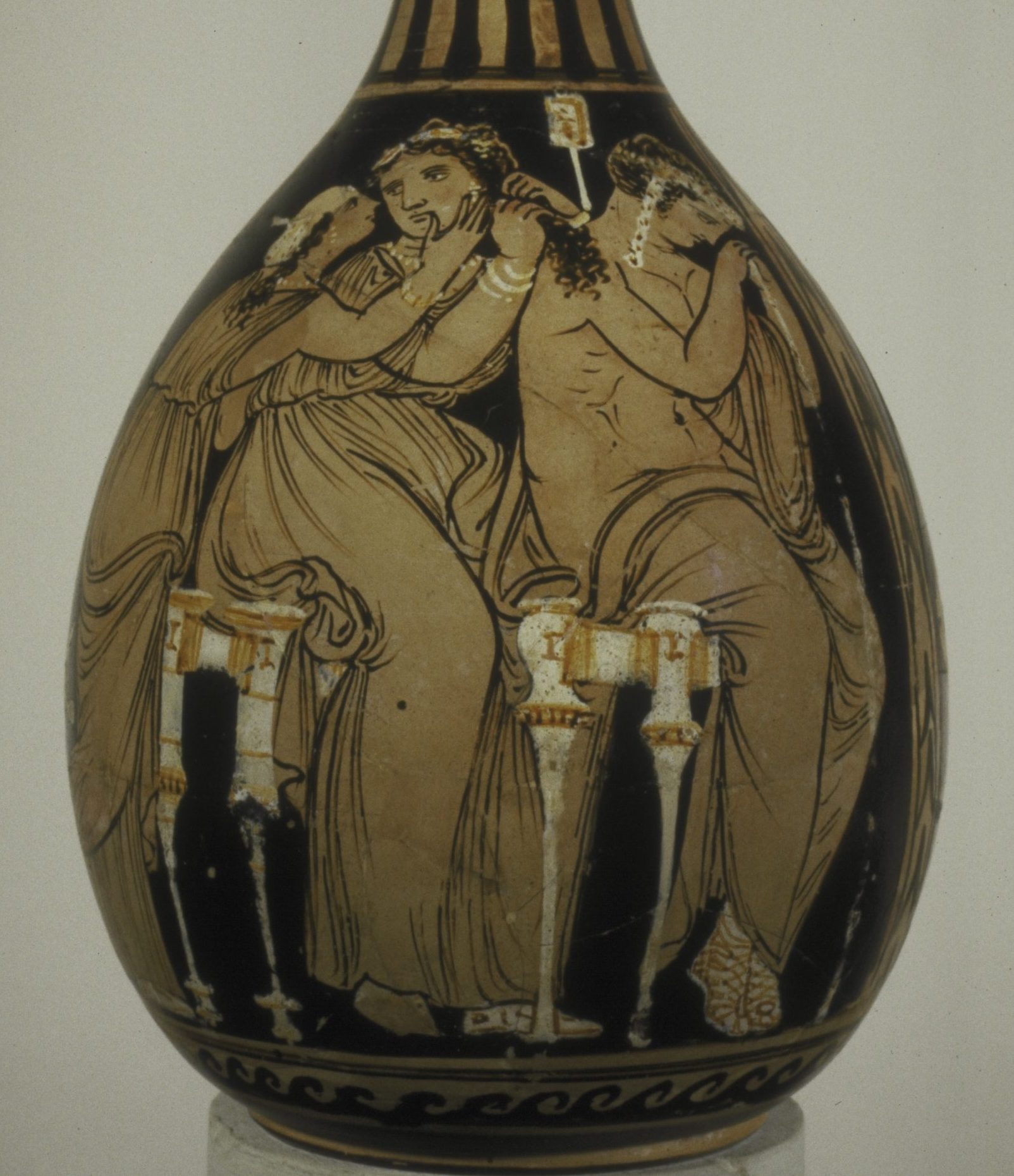 Ancient Greek actors, all of whom were male, played many different parts by wearing masks that represented different characters. These miniature terra-cotta sculptures were created for a funerary set to represent the real masks used on stage.

Athenian playwrights also wrote comedies. The most famous comic writer was Aristophanes, a master of hilarious exaggeration who satirized Athenian society with clever plots. His outrageous characters wore masks like the one depicted on this chous (ceramic jug). 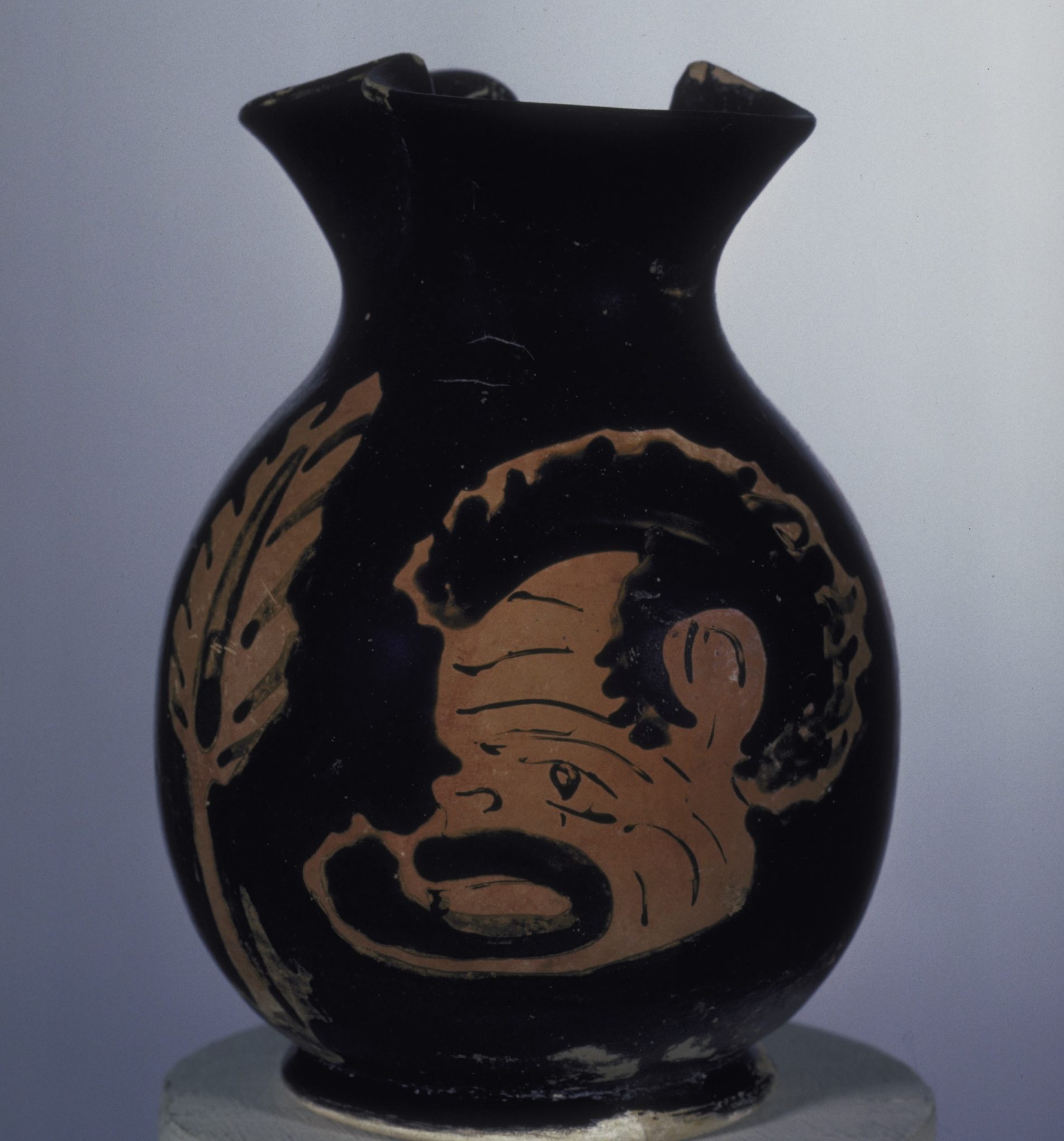 The Greeks produced masterworks of art, philosophy, and literature throughout the 5th century BC, but the destruction and upheavals of the Peloponnesian Wars (431-404 BC) left Greek city-states open to conquest. Taking advantage of this weakness, King Philip II of Macedonia gradually gained control of most of Greece. When Philip was assassinated in 336 BC, his son Alexander the Great ended Greek resistance to Macedonian rule.

Ancient sources suggest that Alexander was tutored by Aristotle and slept with a copy of The Iliad under his pillow. By the time he died in 323 BC, Alexander had created a vast empire and had carried Greek culture as far east as the mouth of the Indus River on the Arabian Sea. During the Hellenistic era that followed, Greek culture flowered throughout the entire Mediterranean Basin, often mixing with and adapting to local cultures.

These exquisite gold ornaments were discovered in a tomb near the city of Amphipolis, originally an Athenian colony in ancient Thrace established around 437 BC. 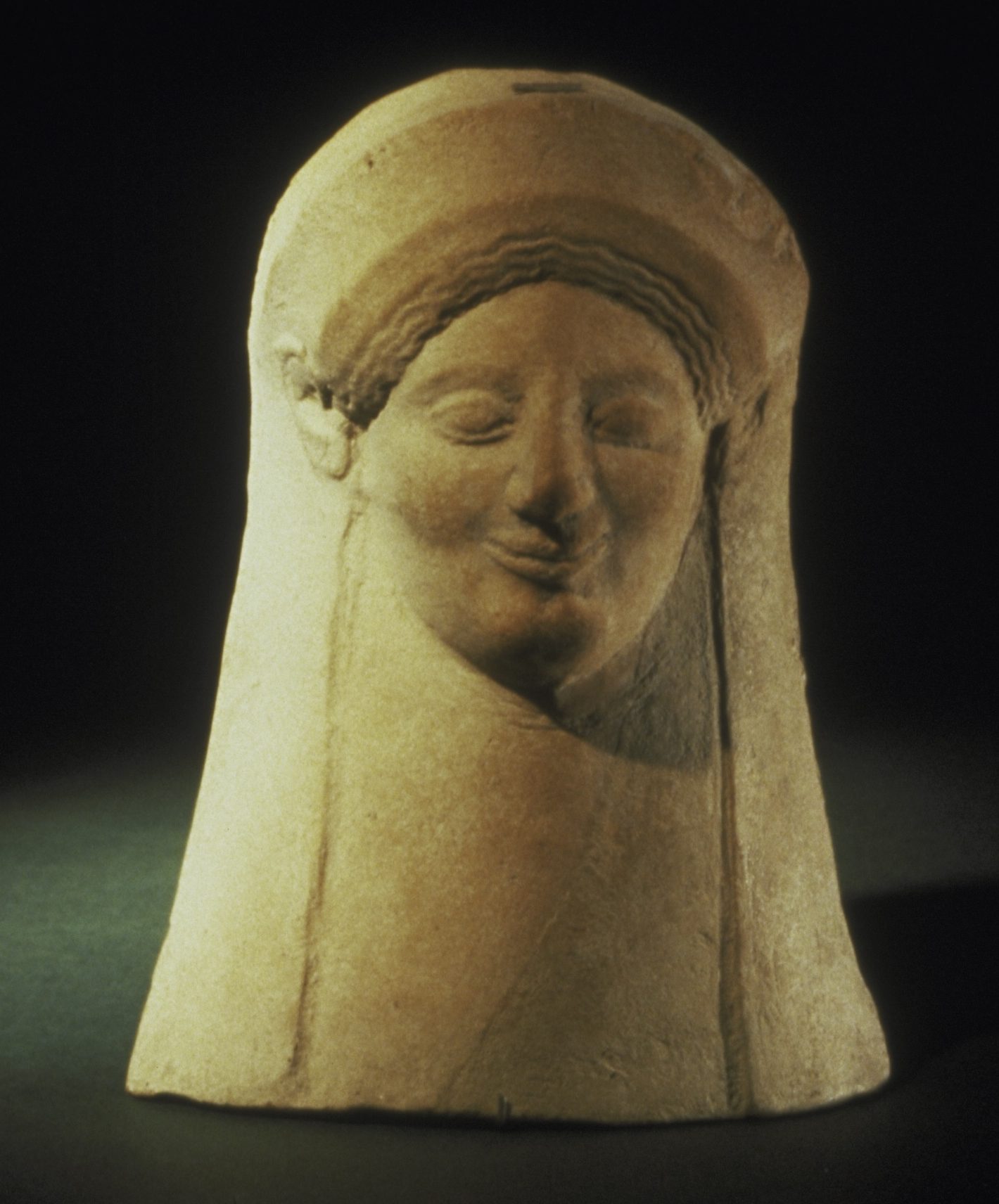 The evolution of Greek sculpture is illlustrated in the images here and below. The Female Protome is typical of the Archaic Age (ca. 650–480 BC), when sculpture was heavily influenced by the blocklike stiffness and stylized features of Egyptian art. The smaller scale and attention to human expression, however, are Greek innovations.

The graceful S-curve, clinging drapery, and twisting movement of Young Woman in a Chiton reflects the growing sophistication of the Hellenistic Period (323–31 BC), in which sculptors concentrated on complex emotions and dramatic compositions. 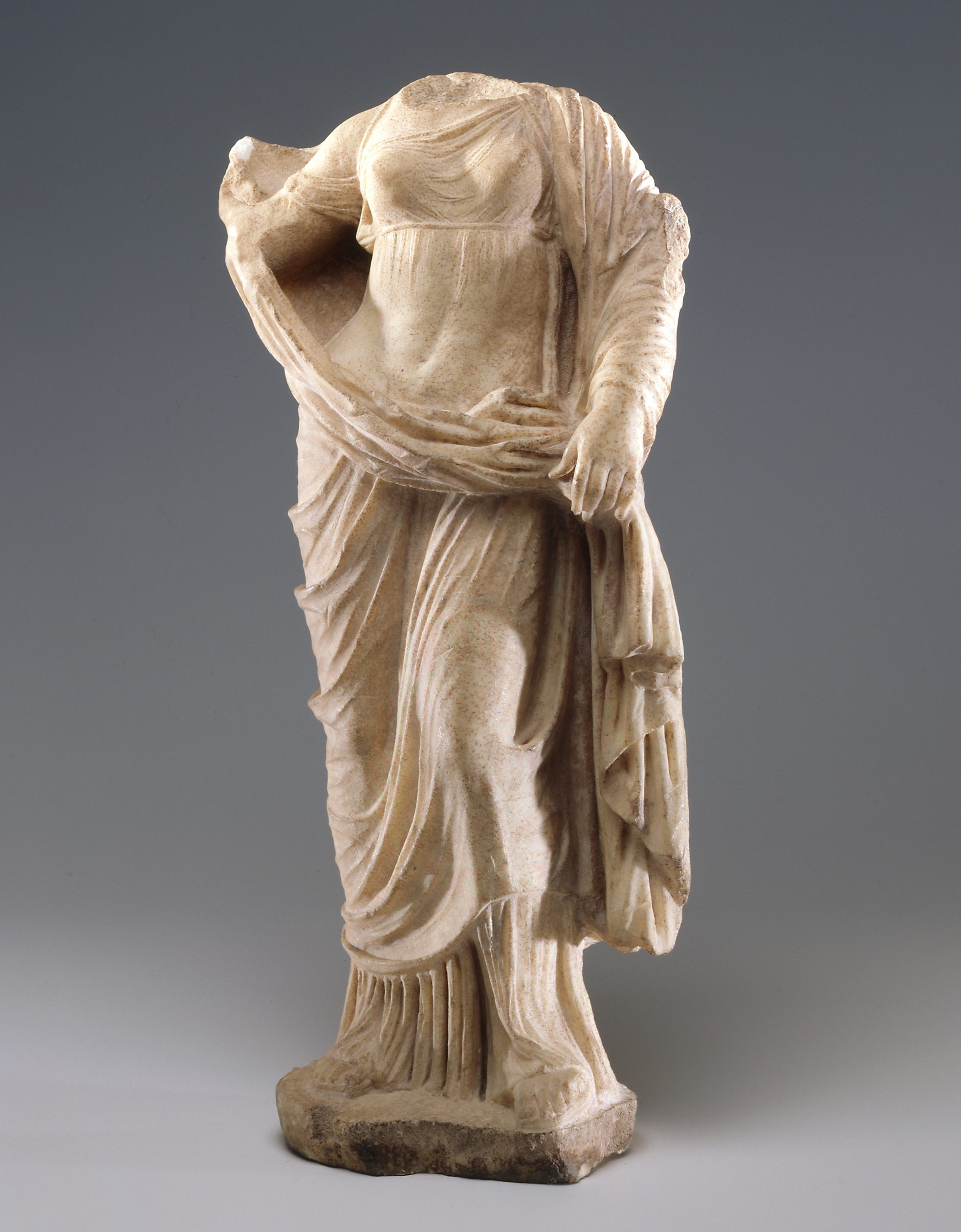