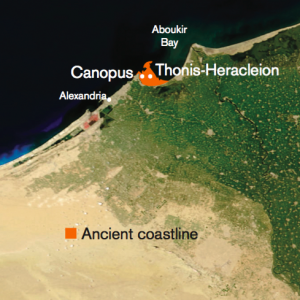 Sunken Cities: An Interactive Dive into the Treasures of Ancient Egypt

Explore objects and themes from the exhibition, Treasures from Ancient Egypt: Sunken Cities. Teachers and students can use this resource to spark curiosity and to think critically and creatively about Egyptian art and culture.

Sunken Cities: An Interactive Dive into the Treasures of Ancient Egypt

About 1,200 years ago, the ancient Egyptian cities of Thonis-Heracleion and Canopus sank below the Mediterranean Sea. All evidence of these cities disappeared except for scattered references in historical documents. In 1996, the European Institute for Underwater Archaeology (IEASM) began excavations in Aboukir Bay looking for the remains of these cities. This team of archaeologists has already recovered an astounding array of objects from the once-lost sites of Thonis-Heracleion and Canopus—and ongoing discoveries continue to provide new insights into the history and culture of the rediscovered cities.

Take this opportunity to look closely at some of these remarkable objects from the VMFA exhibition, Treasures of Ancient Egypt: Sunken Cities, on view through January 18, 2021.

Egypt is a country on the continent of Africa. Ancient Egyptian civilization developed over 5,000 years ago along the Nile, one of the longest rivers in the world. Egyptians called their land kemet, which meant “black land,” after the rich soil that fed Egypt’s crops. Ancient Egypt was protected by natural borders including deserts to the east and west and the Mediterranean Sea to the north.

Click on the hotspot to see how the Nile River flows through Egypt. It flows from south to north for about 4,000 miles from the African highlands to the Mediterranean Sea.

archaeologist– A person who studies human history by examining the objects and artifacts that humans have left behind.

export– An item produced in one country that is sent to another.

festival– A time or event of celebration.

hieroglyph– A stylized picture of an object representing a word, syllable, or sound.

import– An item that comes into one country from another.

Khoiak– The fourth month of the Egyptian calendar, roughly equivalent to our mid-October to mid-November.  It takes place at the end of the Nile flooding season.

netherworld– The world of the dead; it often refers to a place to which one’s spirit descends upon death, usually located below the surface of the earth.

pharaoh– The ruler and most powerful person in ancient Egypt.

port– A place where ships load and unload cargo.

ritual– A special ceremony that is done the same way every time.

stele– An upright stone slab usually inscribed with a message and images.

tax– Money or goods that governments require the people or groups they oversee to pay to the government.

votive– An object used to honor or thank a god or goddess, usually left at temples.

Amun-Gereb– The god who gave pharaohs the right to rule Egypt.

Apis– A sacred, or special, bull who could predict the future.

Horus– An Egyptian god of the sky, usually shown with the head of a falcon.

Isis– The Egyptian goddess of magic. She was the sister and wife of Osiris and mother to Horus.

Osiris– The Egyptian god of the underworld and rebirth. He was the brother and husband of Isis and father to Horus.

Serapis– A new god created by the Greeks in Egypt that combined the Egyptian gods Osiris and Apis with the Greek gods Zeus and Hades.

Seth– God of deserts, chaos, violence, and foreigners. Seth was brother to Osiris and Isis.

Shu– The Egyptian god of air and peace.

Taweret– The Egyptian goddess who was the protector of pregnancy and childbirth. She appears as a combination of a lion, a crocodile, and a hippopotamus.

Use the arrows to navigate through time! You can download a pdf of the timeline here.

The two sets of activities that follow call on your observation and thinking skills as you closely examine selected objects from ancient Thonis-Heracleion and Canopus.

The first four activities provide close-up views with guiding questions and audio recordings with fascinating background information. What will you learn about the connections between power and religion in ancient Egypt?

How do these objects relate to the human need for protection from harm and healing from disease and injury?

SURPRISE ME! Exploring Naos of the Decades

Click on the pop-up hot spots on the image of the naos below to reveal intriguing information about this reconstructed puzzle!

This object is called the Naos of the Decades. A naos is a container for a sacred object. Today, we often use the word “shrine” for this type of container. An ancient Egyptian calendar is carved into the outside stone wall of this naos. It shows that the ancient Egyptian year was divided into 36 decades, or ten-day periods, which explains why this is called the naos “of the Decades.”

Like a number of other Late Period (664-332) shrines, this naos was carved from a single block of stone. The inscription and image on the back wall of hollow area inside the shrine tell us that this naos was dedicated to the creator god Shu.

This naos was reconstructed—piece by piece—over the past 200 years. The roof was found in 1777, near the site of the sunken city of Canopus, which at the time was yet to be discovered. Many years later, in 1933, the base and back wall were found underwater in Aboukir Bay. Finally, in 1999, when the archaeologists of IEASM discovered four more sections, they were able to piece the shrine together like a jigsaw puzzle.

SURPRISE ME! Exploring the Statue of Taweret

Click on the pop-up hot spots on the image of Taweret below to reveal some cool facts about this important goddess!

Taweret, known as “the Great One,” kept evil away from new mothers and infants with her fearsome appearance. Here, the goddess appears with the head and body of a hippopotamus, the limbs of a lion, and tail of a crocodile—all frightening and dangerous creatures.

This statue was found in a limestone shrine near the chapel of Osiris Padedankh (which means “Osiris Who Gives Life”). The back pillar has an inscription in which the Egyptian ruler Psamtik I asks Taweret to protect his daughter, Nitokris.

SURPRISE ME! Exploring the Stele of Horus

This object includes a stele (the large flat stone sculpture at the top) and the basin beneath. It was used for healing rituals.

The main figure shown on the stele is Horus, the son of Osiris and Isis. Although Horus was one of Egypt’s most important gods, this stele was actually dedicated by a Phoenician named Pâl-Astarte, son of Chembrebi. The Phoenicians were people from Phoenicia, an eastern Meditterannean civilization, which included the modern country of Lebanon, parts of Syria, and Israel.

Now that you’ve explored these objects, take a few minutes to think about these reflection questions:

These objects gave you a brief glimpse at aspects of life and culture in ancient Egypt in a particular time and place. But what was life like in other parts of Egypt and in other times and places? Investigate this question by exploring VMFA’s permanent collection.