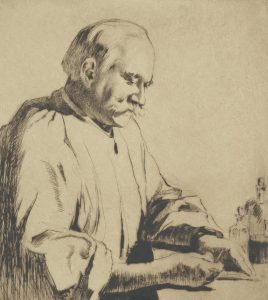 This Art in Depth Resource highlights six printmaking methods used by artists in Britain at the turn of the 20th century. The selection of techniques are drawn from the body of work produced by Sir Frank Short (1857-1945).

Born in the industrial heart of England, Short initially trained as a civil engineer. After seeing a print by seminal landscapist J. M. W. Turner, Short abandoned this vocation to pursue printmaking. Aided by his engineering mindset, he mastered six different printmaking methods: etching, drypoint, soft-ground etching, lithography, and the languishing historic traditions of mezzotint and aquatint. Descriptions of each method of printmaking may be found below. 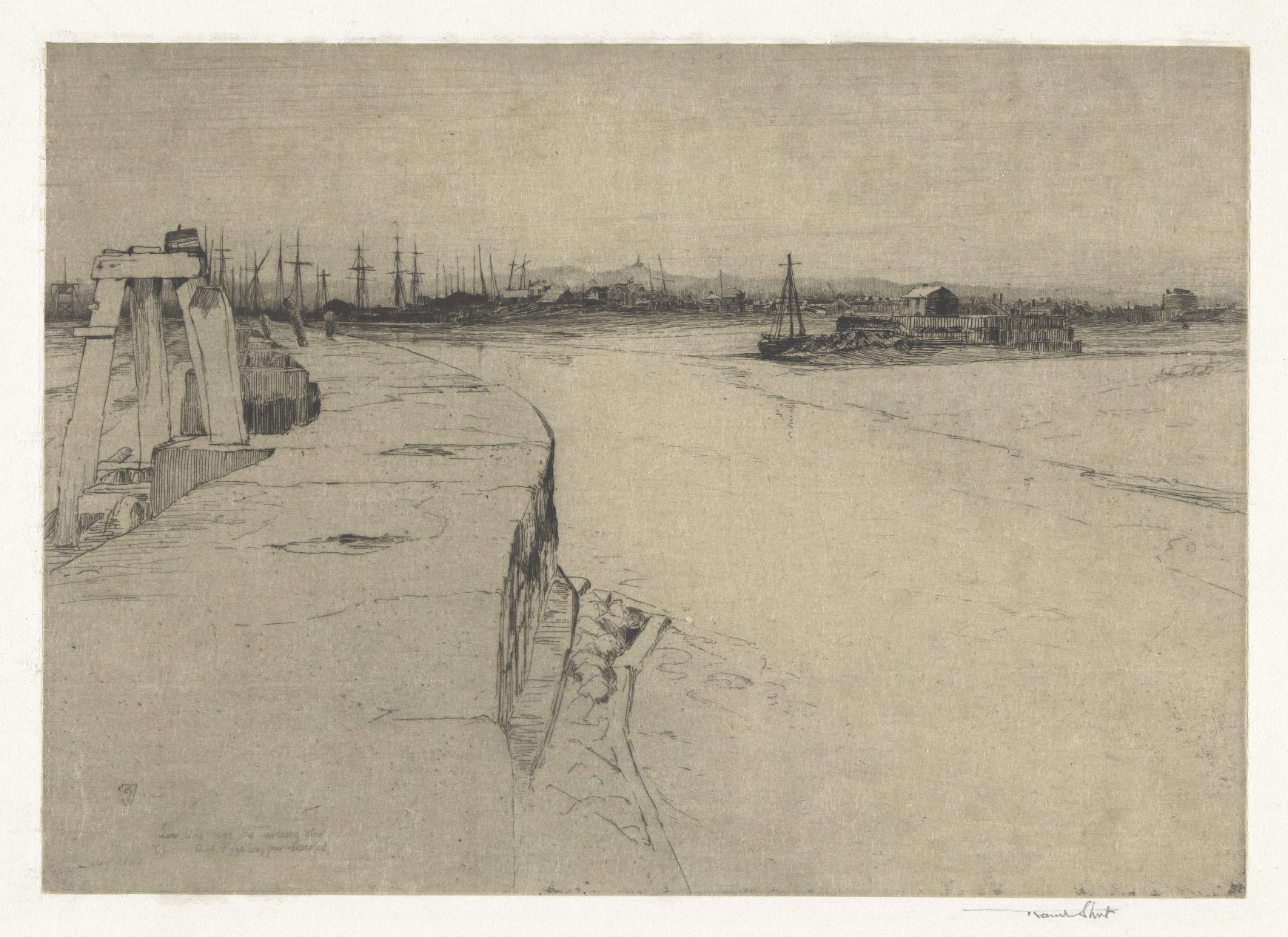 ETCHING traditionally begins with a copper plate, although occasionally artists in the 19th century used other metals, such as zinc.  The artist first covers the plate with a waxy coating (ground).  Next, the artist uses a sharp tool to draw lines through the wax, exposing the copper plate beneath.  After the line drawing is complete, the plate is placed in an acid bath.  The acid eats into the copper plate, but only where the wax has been removed, creating recessed lines that will later hold ink.  The longer the plate is exposed to the acid, the deeper and darker the lines will be.

After the plate has been etched in acid, the protective waxy layer is cleaned off and the copper plate is ready for inking. Ink is spread over the entire plate. The surface of the plate is gradually cleaned leaving ink only in the recessed lines that were etched into the surface by the acid. The inked plate is now ready for printing.

Printing is done using dampened paper and a press.  Dampened paper is placed over the inked plate and both are run through the press.  The press subjects the paper and the plate to an extreme amount of pressure, forcing the paper down into the inked, etched lines. This process transfers the ink lines onto the surface of the paper, creating a mirror image of what was drawn onto the plate. Since the paper is always larger than the plate, the applied pressure also transfers into the paper a characteristic indentation identical to the dimensions of the plate.

This process is often repeated numerous times to make an edition of prints, called a state. Sometimes changes are made to the original plate’s composition at a later time. When the reworked plate is reprinted, the new prints form a second state.

DRYPOINT is a type of engraving in which the artist uses a steel- or gem-topped tool to engrave, or draw, directly into a smooth metal plate. The pressure from this tool raises shavings of metal (known as burr) on both sides of the gouged line. This recessed line and the shavings hold ink and transfer it to the paper when printed, which produces a distinctive velvety line, which Frank Short described as, “melting away into the paper with a mysterious graduation.” Because the burr quickly wears down due to the great force of the print press, editions of drypoints are comparatively small. 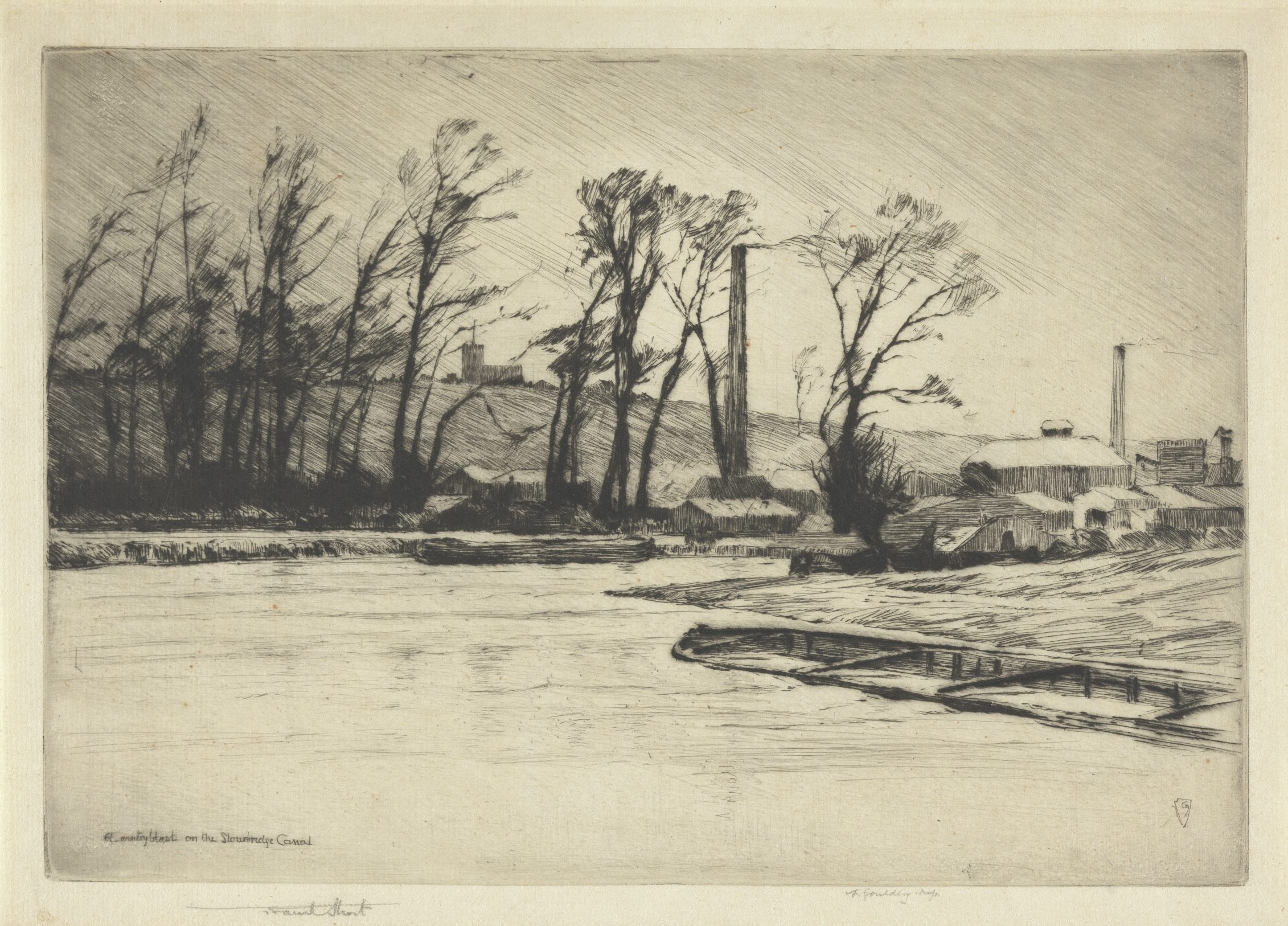 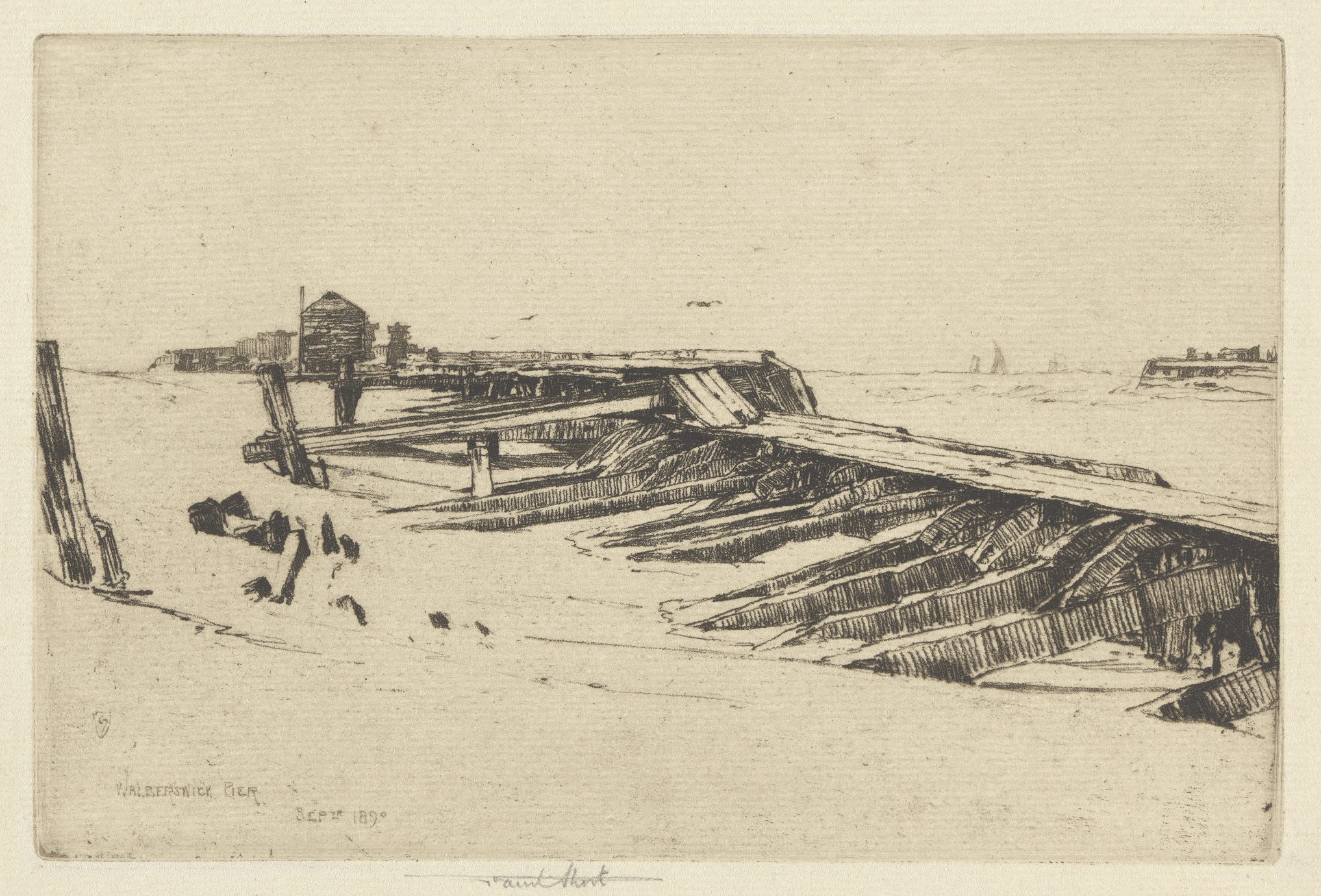 SOFT-GROUND ETCHING, as its name suggests, contains a ground that is applied to a copper plate that is not as hard as that used in regular etching. A soft-ground is created by mixing an equal amount of a normal etching ground with tallow (animal fat), which is then spread over the copper plate. Next, a piece of paper is laid atop the soft-ground coated plate, making sure to avoid disturbing the ground. Resting one’s hand against another surface, the composition is drawn using pencil on the surface of the paper. Once finished, the paper is carefully removed from the plate. Left untouched on the plate are all of the areas of the soft-ground that did not adhere to the paper from the pressure of the pencil.  The plate is then, as in etching, subjected to an acid bath. The acid eats away at the exposed copper, creating recessed lines that when filled with ink and printed, simulate the effect of the pencil.

LITHOGRAPHY is a process of producing a print by drawing directly on a specially prepared smooth limestone surface (or metal plate) with a grease pencil, crayon, or other tool. When the drawing is complete, a mixture of gum Arabic and acid is rubbed into the surface of the stone, to eat a tiny amount of the stone away, which prevents the greasy drawing from spreading. After the removal of the acidic mixture, the stone is made wet using water.

Because oil and water repel each other, when an inked roller is passed over the wet stone, the greasy ink only adheres to the greasy drawing and not the blank wet areas. The stone is then ready to be printed. A piece of paper is placed over the entire drawing on the stone and it is passed through a press.

Invented in the early 19th century, lithography soon supplanted etchings, mezzotints, and aquatints as a wonderful and expressive method to reproduce drawings and paintings. Because of lithography’s ease and cost-effectiveness, printmakers working in this method had to continually fight the assumption that lithography was not a form of high art. 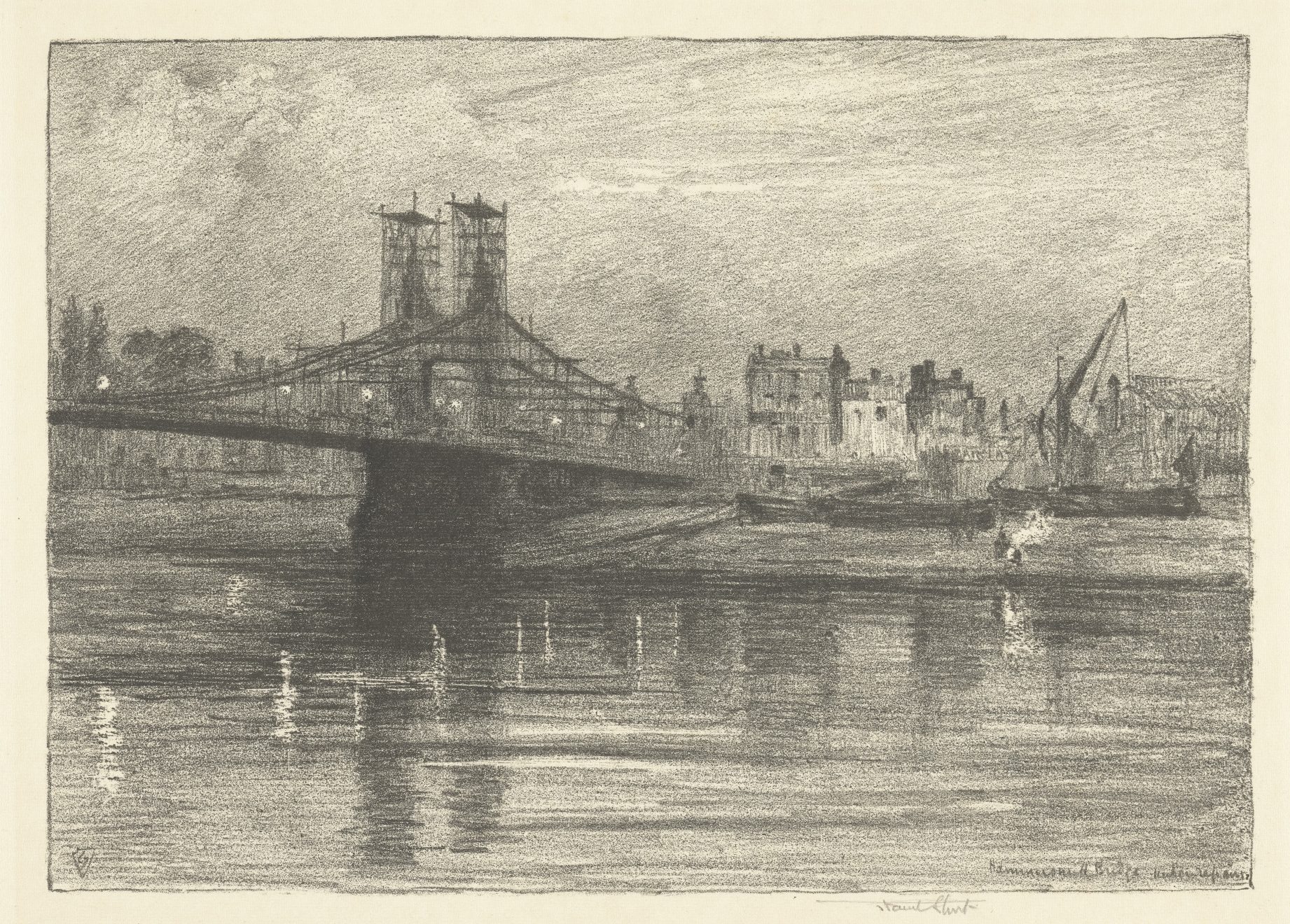 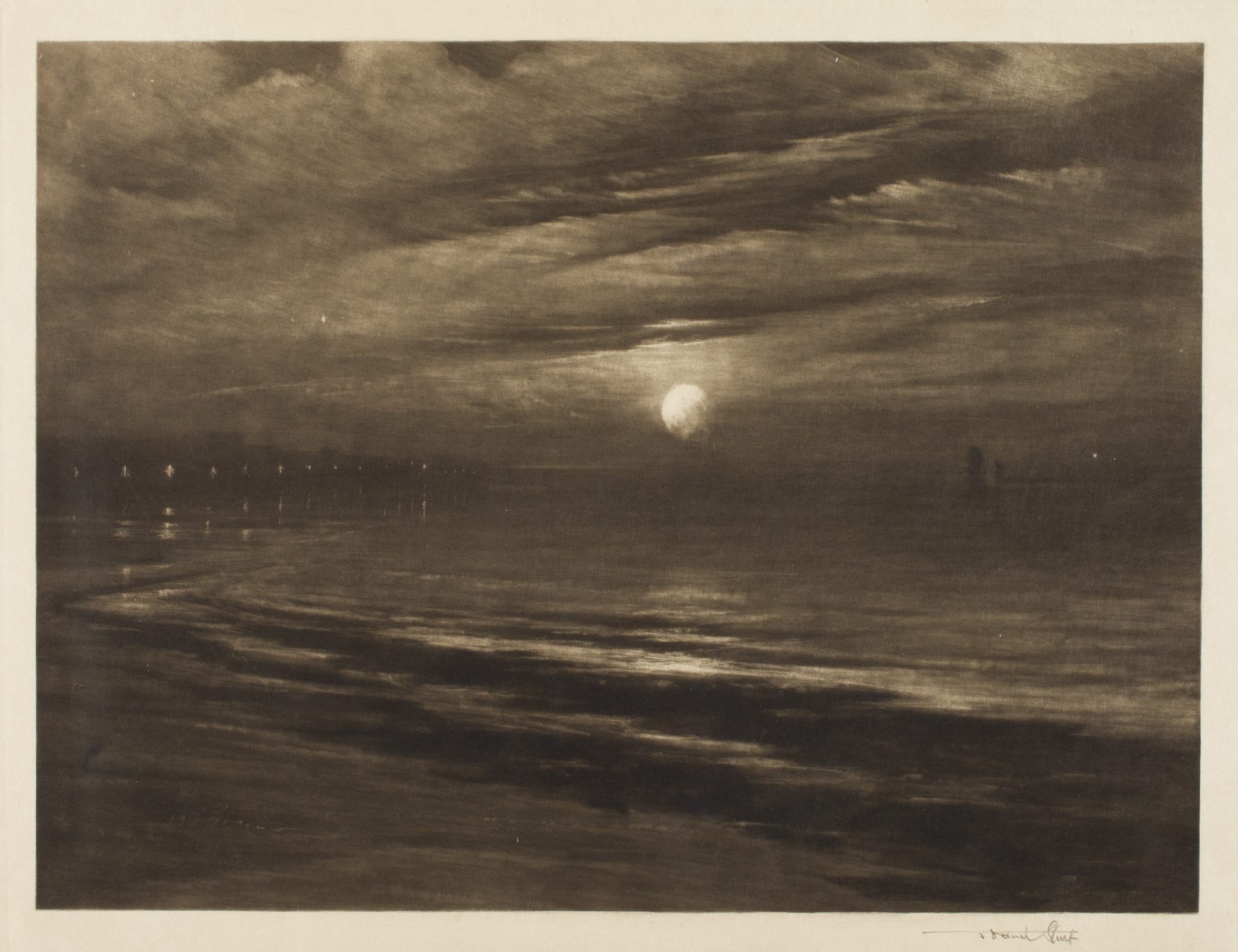 MEZZOTINT was popularized in the late 18th century. It was a type of printmaking process created with the intention of reproducing the wide tonal range of oil paintings more faithfully than a line engraving.

To produce a mezzotint, the surface of a metal plate must first be roughened using a rocker that has numerous sharp teeth-like projections. During Frank Short’s career, rockers were a only a few inches wide and had anywhere from 40 teeth per inch (which produced a coarse ground), to 120 teeth per inch (which produced a fine ground).  Rockers then rock over the entire surface of the plate in numerous directions and angles, resulting in a uniform series of divots.

The plate is judged to be sufficiently roughened when the innumerable dimples would cause the plate to print a rich velvety black after being inked. The artist creates lighter tones by using a sharp tool, called a scraper, to remove areas of roughness (burr). Areas that are to be the most brilliantly lit have to be burnished in – so that the texture is all but removed.

A Closer Look at Mezzotint - Short's Fish Auction at Whitby, 1886

AQUATINT,  as its name suggests, is a specialized form of printmaking. It was developed and came into its own during the late 18th and early 19th centuries as a way to sympathetically capture the effects of watercolor.  This medium fell out of favor with the ascendency of lithography and other photo-mechanical reproductive processes, but was reinvigorated by Sir Frank Short in the late 19th century Britain.

As with other forms of etching, aquatint relies upon the biting of a plate with acid to different depths that will ultimately correspond to the production of lighter and darker areas of tone. However, unlike straight etching the coating (ground) laid atop the copper plate is porous.  There are two main types of porous grounds, dust or spirit.

A dust ground is applied by allowing a dusting of powdered resin to settle evenly over the surface of the plate, which is then warmed, allowing for the specks to adhere/bond to the plate.

A spirit ground is made by dissolving resin into a liquid ‘spirit’, such as wine. That mixture is then poured over the plate, with the excess liquid allowed to run off the edges. When the remaining liquid evaporates, only the resin remains, in a series of visually distinctive miniscule cracks. The plate is then warmed, allowing the resin to adhere to the plate.

After the porous ground is selected and applied, the method of stopping out areas with resin and biting exposed areas with acid follow just as in etching. Sir Frank Short was an advocate of both grounds, and would select one or the other based on how sympathetically it would capture the desired textural effects. 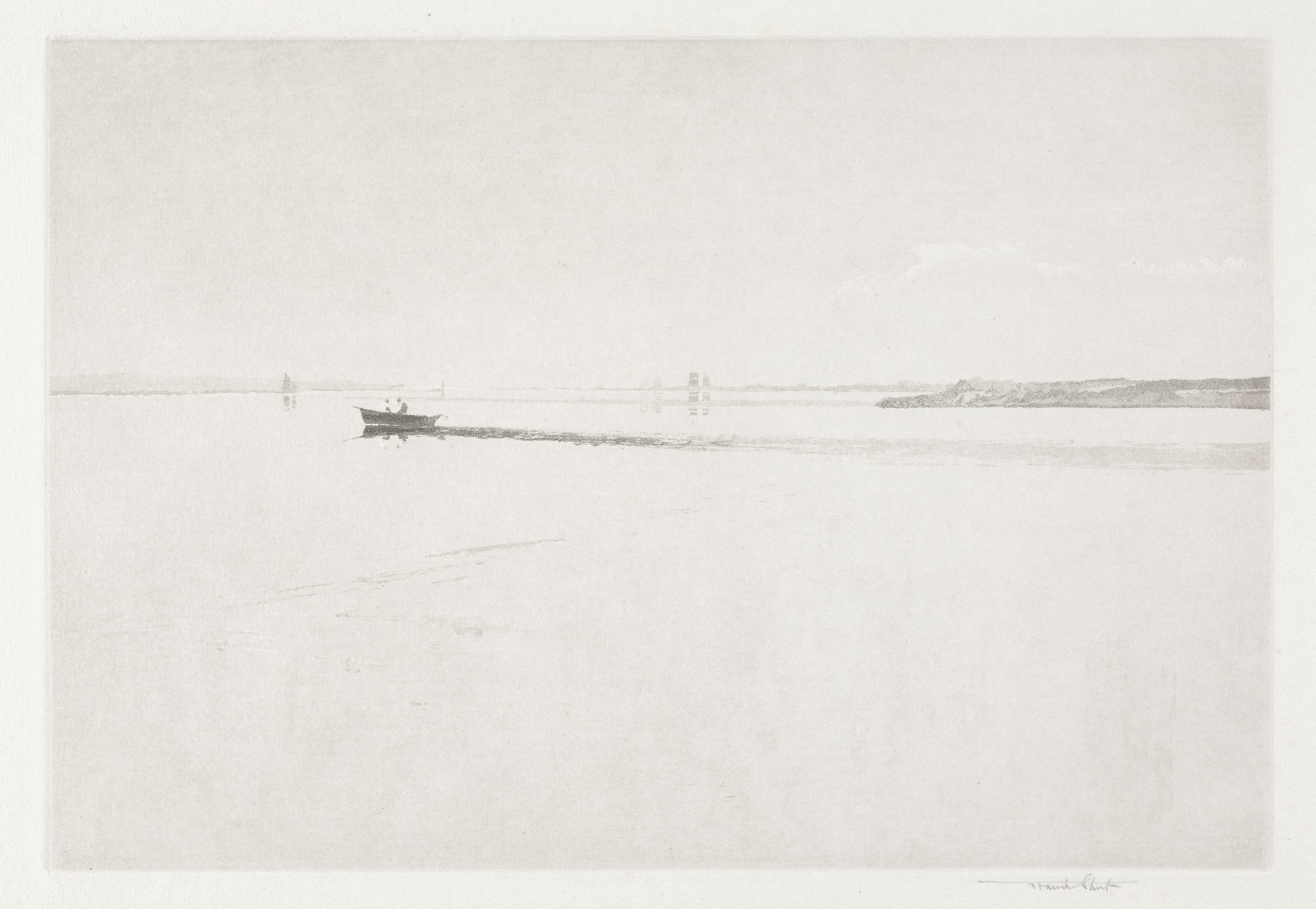 A Closer Look at Aquatint - Short's A Span of Old Battersea Bridge, 1899