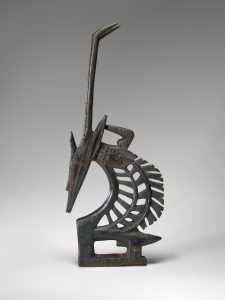 The continent of Africa has a rich and complex history that stretches back to the beginning of time.  Some of the world’s greatest empires arose in West Africa, south of the Sahara Desert, and one of the most prominent of those civilizations was the Ancient Empire of Mali (ca. 1235-1670), not to be confused with the modern day nation – The Republic of Mali (founded in 1960).

Around the 2nd millennium BCE, humans began to transition from the migratory traditions of hunting & gathering to settling in particular areas, where they could herd domesticated animals and cultivate the land.  In West Africa, similar to other parts of the world, different groups of people began to settle all around major waterways, such as the Niger River.

Sections of the Niger River flood periodically, providing fertile, agricultural soil along its banks as well as ideal pasture for livestock, making it a perfect location for farming.  As communities of farmers began to grow in these areas, they joined forces in an effort to protect themselves from outside threats, eventually forming a loose federation of states, which would become the “Kingdom” of Ghana, and later develop into an empire (the Empire of Mali would succeed the Empire of Ghana). You can find a more complete narrative of these ancient empires here.

At its height, in around 1300, the powerful Empire of Mali, covered an area that is twice the size of France.  Central to the prosperity of the Mali Empire was its prime location, which stretched from the rain forests of southern West Africa up to the Sahara Desert in North Africa. These vast regions are rich in natural resources such as gold and copper – valuable and precious metals that were in high demand in other parts of the world. 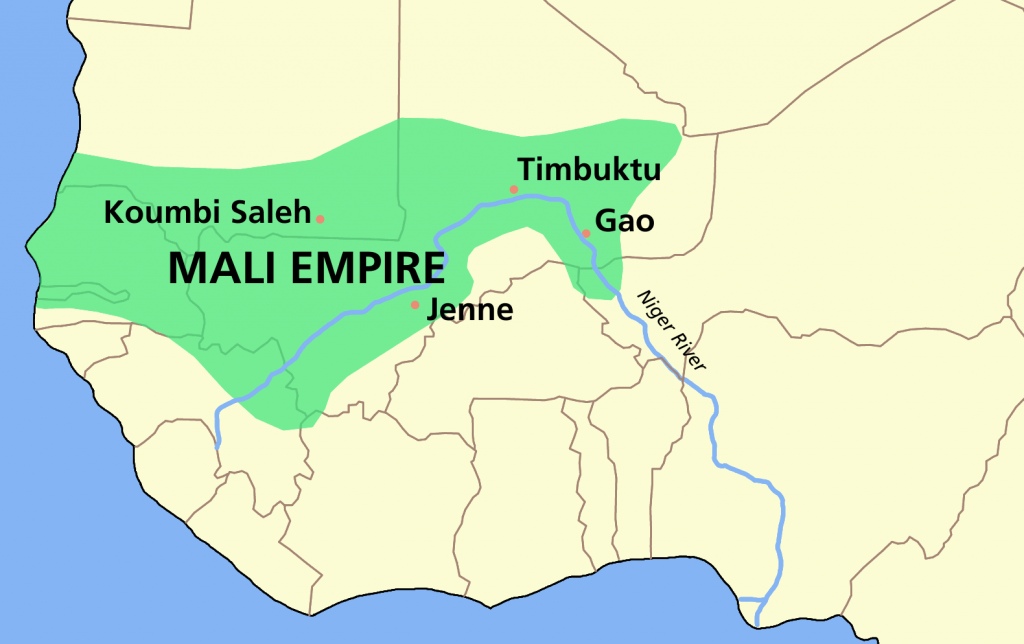 Mali was situated on the Niger River, providing ready access to Africa’s interior and to the Atlantic coast, giving the empire control over major trade routes.  The city of Timbuktu, one of the most important cosmopolitan trade & learning centers on the continent, served as the crossroads between caravans coming from North Africa across the Sahara Desert and others coming from the forest regions of the south.  All goods passing in, out and through, were heavily taxed.  One of the main trade exchanges on the trans-Saharan routes was gold dust for salt.  Other trafficked goods included ivory, textiles, sugar, weapons, spices, kola nuts, and enslaved peoples, to name a few.  As a result of this prosperity, Timbuktu became the leading center of Islamic education bringing rise to many religious schools, universities and private libraries.

Two ancient metropolises in the Empire of Mali that rose to great prominence were Djenne [jen-ay] and Timbuktu. About 200 miles apart from one another, and both situated on the Niger River, these two powerful cities were major locations in the trade industry that connected with the Mediterranean Basin.

Copper, a durable metal which was not native to West Africa, was a prized commodity that was often imported into the Empire of Mali.  In exchange, the primary export from the empire was gold and salt.  Gold, which is native to the regions of present-day Ghana, brought great prosperity to the empire through trade, but was also (according to the beliefs of some indigenous cultural groups) considered the earthly counterpart to the sun and the material embodiment of one’s life force.

In order to better regulate the trade of gold, West African merchants developed brass weights that set standard units of measure. Gold (in the form of gold dust, which was the currency in many regions at the time) would be exchanged in the marketplace and vendors would use gold weights and a scale (like the ones in this case) in order to measure the amount for trade. The gold weights seen in the case are made of copper alloy, like brass (most likely imported from Europe). In their original state, they would have had a shiny, gold luster, but over time, as oxidation occurs, the objects take on a greenish color.

This region of West Africa is extremely diverse, not only in the geography and natural resources indigenous to the land, but also in the people.  Many of the cultural groups living in present-day Mali have been inhabitants of the region for thousands of years.  Some of the main ethnic groups of Mali are the Bamana, Dogon, Tuareg, Fulani, Senufo, and the Bwa – to name only a few amongst an extremely complex web of distinct cultural groups. You can find more information about Mali’s cultural groups here.

The rich history of these groups has traditionally been preserved and passed down for hundreds of years by official oral historians, or griots.   Whether it is presenting poems, singing praise songs, or giving accounts of past events, griots are known as the “Keepers of Memories.”  They are the source of oral traditions specific to a community or a peoples, recording significant historical facts and events such as births, deaths, marriages, etc.  A highly respected member of society, a griot traditionally had a wide variety of responsibilities that ranged from educator to historian, genealogist, adviser, musician and more.  Using an accompanying instrument, griots told stories through music.  From the Ancient Empire of Mali to the present day nation, music continues to play a key role in West African daily life for dance, healing, storytelling and special ceremonies.

From Ancient Empire to Modern Nation

Over the centuries, powerful empires (like Mali) began to break down until finally dissolving into small, independent chiefdoms.  By the mid-19th century, there was no central power in the area, which allowed European countries, who were seeking to exploit the natural resources in the area, to come in and colonize the region.  The French seized control of Mali and established their colonial power naming it The French Sudan.  By 1960 they finally achieved independence from France and declared themselves the independent Republic of Mali, taking the name from the once powerful empire.

Ci Wara:  A mythical creature (half human, half animal) that taught the Bamana People how to farm the land.  Translation – “wild animal that works.”

Raffia: The fiber from the raffia leaves, used for making items such as hats, baskets, mats, and sometimes used in masks.

Nyama:  the Mande concept of power that exists in all things and animates the world

Griot:  An official oral historian for a community, village, or clan/family.

Colonization:  The action or process of settling among and establishing control over the indigenous people of an area.

The Bamana people (one of the many sub-groups of the larger Mande Culture) are known for their earthen-dyed textiles, such as this impressive Hunter’s Shirt.  When a hunter is in the bush, they dress in a practical manner, wearing simple pants and shirt to facilitate quiet mobility.  Special shirts, such as the object here, represent a kind of formal wear that marks them as distinguished among other citizens.

In a society where clothes divulge a great deal about their wearers, these extraordinary shirts are proud declarations of identity and would be worn at public events such as festivals, parades, funerals, and other special gatherings.  Traditionally, hunters are known for their impressive physical skills, as well as for their supernatural capacities.  Their ability to survive long periods of time in the wilderness is due to their extensive knowledge on how to use the environment for their various needs.  Being able to harness this special energy found in nature, further distinguishes the hunter from the majority.  Although today in West Africa, hunters have become less important as cultural symbols, hunting, as an institution, is still significant in modern day Mali, and shirts like these are still being produced.

Statue of a Bird

According to traditional Senufo beliefs, the hornbill is often referred to as “the first ancestor,” associating it with the elders, who often act as guardians.  Standing over four feet tall, this great bird is both a statue and a headdress.  It is used by members of the poro society, an important, all-male institution concerned with ancestors, family, and village unity.  In addition to occasionally being used as a headdress, the statue is also used as a marker or landmark, warning passersby that the men’s group society is meeting in a private location nearby.  When the figure is not in use, it is typically kept in a sacred grove, symbolically standing guard, protecting the members.

Nesting habits of the hornbill are particularly significant to the poro society.  Generally, one male and one female hornbill will remain together as a couple and work in tandem to create a safe nesting site (typically a hole in a tree or rocks).  Shortly before incubation, the mother hornbill begins to build a wall of mud around the hole, leaving just enough space to enter.  Once inside, she is packed in completely by the father hornbill, who continues to bring food to her, and eventually, to the chicks.  Once the chicks and mother hornbill are too large to stay inside the nest, they break through the mud wall and emerge into the world.  This nesting habit is a metaphor for rebirth or regeneration and symbolizes the young, poro initiates’ transition into manhood.

Visit the Metropolitan Museum of Art’s website to see another example of a Senufo Hornbill Statue/Headdress and to get an idea of how styles vary from region to region among the Senufo people.

In addition to our Hunter’s Shirt (above), VMFA is fortunate to have acquired other extraordinary objects made by the Bamana People of Western Mali, such as this Ci Wara Headdress.  For this cultural group, agriculture is a way of life, dating back to the beginning of time, when Ci Wara (a mythical creature described as being half-human, half-animal), according to traditional Bamana beliefs, first taught humans how to cultivate the land.

In an effort to recognize and honor the contributions of Ci Wara to society, as well as to encourage farmers to be diligent, hard workers, Ci Wara masquerades are performed on an annual basis.  Typically, these masquerades take place during times of planting & harvest with performances that embody ideal qualities of champion farmers.

Performances always involve two masked dancers – one that is male (like our headdress under discussion) and another that is female (she is always shown with a baby Ci Wara on her back). Having a male and female couple in the performance underscores the importance of partnership, both in farming and in procreation.  The masked performers are covered with long raffia fibers that have been dyed a dark color.  The dancers execute choreographed movements, causing the raffia to undulate, subtly referencing rainfall or water.  With the convergence of these three things– the male Ci Wara (said to represent the sun for its power), the female Ci Wara (said to represent the earth for its nurturing, life-giving/life-sustaining abilities), and the raffia (said to represent water or the rain) – the performance becomes a metaphor for the elemental forces upon which all human life depends.