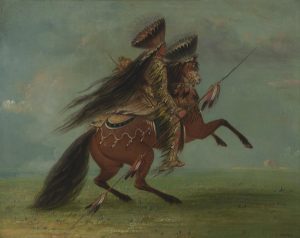 George Caitlin's unique perspective allows us to better understand the diversity of Native American cultures and is remembered for humanizing his subjects as well as recording the details of their appearance, customs, and activities in his paintings. He is considered a pioneer in the field of ethnography, the study of specific cultures. Catlin’s paintings, writings, and explorations serve as a springboard for a wide variety of art, history, and social-studies projects.

George Catlin traveled the North American continent from 1830 to 1838 chronicling native people and their ways of life in paintings and prints. His adventures resulted in more than six hundred portraits and scenes of rituals, hunting, and daily life from more than fifty Native American groups.

Born in Wilkes-Barre, Pennsylvania, Catlin grew up on a farm on the Susquehanna River in Broome County, New York. His mother and grandfather fought Native Americans and survived the Wyoming Valley Massacre of 1773. Catlin’s mother was briefly held captive by the Iroquois. Catlin, however, had little experience with Native Americans in his youth. He became acquainted with an Oneida man, named On-O-Gong-Wa (Great Warrior), who camped for a while on the Catlin family farm.

Catlin’s interest in Native Americans grew from a chance encounter in Philadelphia. They were traveling to Washington, D.C., as an official delegation, and the artist was impressed by their dignified presence. He resolved to dedicate himself to documenting the lives of Native Americans in their homelands.

Over a period of six years Catlin visited many tribes in hopes “of reaching ultimately, every tribe of Indians on the Continent of North America, and of bringing home faithful portraits of their principal personages, . . . views of their villages, games and full notes on their character and history.” His travels to the Indian homelands coincided with the movement of Native Americans to reservations mandated by the U.S. Indian Removal Act of 1830. Catlin’s works are among the final documentation of many tribes in their native lands.

To raise public awareness of these endangered cultures and to help underwrite his own expenses, he created “Catlin’s Indian Gallery,” which contained his paintings and artifacts from his travels. The gallery opened in New York in 1838, toured Washington, Baltimore, Philadelphia, and Boston for a year, and then went to Europe. Catlin also became a noted author and lecturer on Native Americans.

Unfortunately, Catlin lost his traveling show to creditors in 1852 and spent time in a debtors’ prison in England. He and his collection were rescued by Philadelphia industrialist Joseph Harrison, who paid Catlin’s debts in exchange for the contents of the gallery.

In 1853 Catlin began another series of journeys that took him to South America and the West Coast of the United States. After seven years of travel, he spent the next decade painting in his studio. From 1871 until his death the following year, Catlin exhibited those works in New York and at the Smithsonian Institution in Washington, D.C. 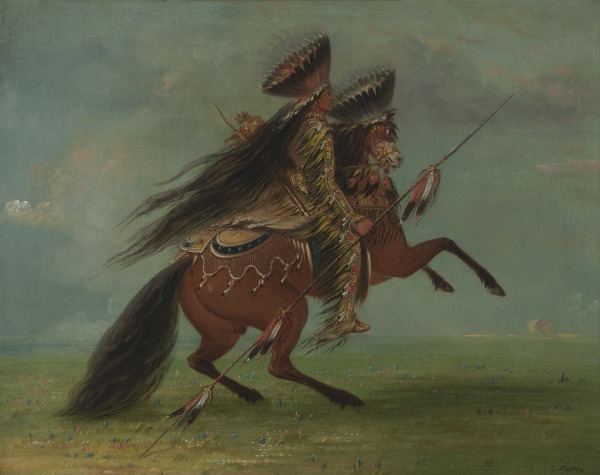 Ba-da-ah-chon-du (He Who Outjumps All), a Crow Chief on Horseback

While touring the U.S. Midwest, Catlin was a guest of the Crow and the Minnetaree on the upper Missouri River. He marveled at their extraordinary feats of horsemanship on the plains of present-day North Dakota. Describing this painting of a Crow chief, Catlin wrote:

I have painted him as he sat for me, balanced on his leaping wild horse with his shield and quiver slung on his back, and his long lance decorated with the eagle’s quills, trailed in his right hand. His shirt and his leggings, and moccasins, were of the mountain-goat skins . . . their seams everywhere fringed with a profusion of scalp-locks taken from the heads of his enemies slain in battle. His long hair, which reached almost to the ground whilst he was standing on his feet, was now lifted in the air and floating in black waves over the hips of his leaping charger. On his head, and over his shining black locks, he wore a magnificent crest or head-dress, made of the quills of the war-eagle and ermine skins; and on his horse’s head also was another of equal beauty and precisely the same in pattern and material. Added to these ornaments there were yet as many others which contributed to his picturesque appearance, and amongst them a beautiful netting of various colours, that completely covered and almost obscured the horse’s head and neck, and extended over its back and its hips, terminating in a most extravagant and magnificent crupper, embossed and fringed with rows of beautiful shells and porcupine quills of various colours. (Catlin, Letters and Notes, vol. 1, letter 24)

Other Works by Catlin

Tuch-ee, A Celebrated War Chief of the C...

Tuch-ee, A Celebrated War Chief of the Cherokees

Use the following suggested questions and discussion points while looking at Catlin’s work.

Have students make a map of their own travels. Whether they have ventured only as far as their school or around their neighborhood or city, instruct them to mark these destinations on a map.

Enrichments: Add to the adventure by having them compose a short journal entry describing a trip or compare modern modes of travel to those of Catlin’s time (canoe, horseback, steam boat).

Encourage the students to share their ideas about what they produced!

"The Scalp Dance" from Catlin's North Am...

"The Snow-Shoe Dance" from Catlin's Nort...

Comanche War Party on the March, Upper A...

The Trotting Phantom, Pursued by Pawnee ...

The Trotting Phantom, Pursued by Pawnee Indians North of the Platte (Primary Title) – (85.608)

Salmon Spearing by Torchlight by Nayas I...

Reconnoitering Flamingoes, by the Author...

Reconnoitering Flamingoes, by the Author in the Grand Saline of Buens Aires (Primary Title) – (85.617)

Young Indians (Marahuas), Fishing on the...

Young Indians (Marahuas), Fishing on the Shore of the Amazon with Harpoon Arrows (Primary Title) – (85.619)

A Forest Above a Forest – View Taken on the Rio Trombutas, Above the Great Rapids (South America) (Primary Title) – (85.620)

Shooting Condors in the Eastern Sierra of the Andes (Primary Title) – (85.621)

Reconnoitering a Herd of Wild Cattle on ...

Band of Wild Horses on the Pampa del Sac...

Halting to Make a Sketch, Border of Pamp...

Tuch-ee, A Celebrated War Chief of the C...

BA-DA-AH-CHON-DU (He Who Outjumps All); A Crow Chief on Horseback Showing His Rich Costume and the Trappings of His Horse (Primary Title) – (85.609)