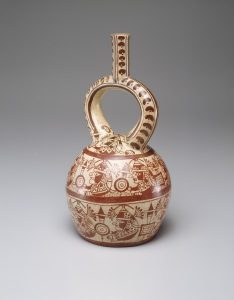 Discover the Moche culture and be introduced to its ceramic traditions of stirrup bottles and fine-line painting! 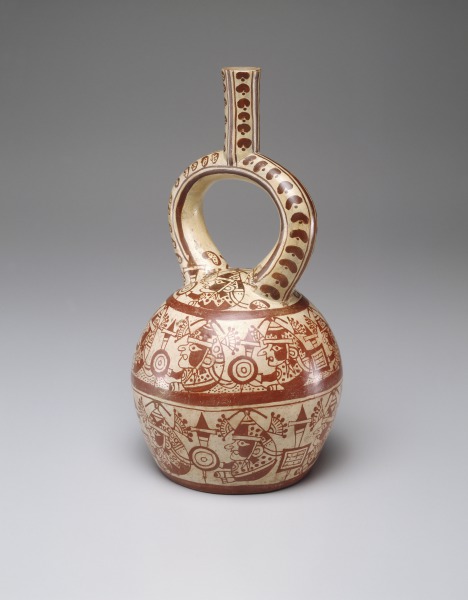 This stirrup-shaped bottle was created by the Moche (pronounced moh’-chay) people who lived in South America on the north coast of Peru along the Moche River between 50 and 800 CE. They were a warlike culture that spoke a language called Mochica (pronounced mo-chee’-kah). They made terra-cotta pottery vessels in interesting shapes, such as this stirrup bottle. This particular shape was also practical. Most of the land where the Moche lived was dry desert, and the shape of this vessel slowed the evaporation of the liquid inside the bottle. A bottle could be carried, usually over the shoulder, by a strap threaded through the opening beneath the stirrup. The Moche made thousands of stirrup-spout bottles from clay that contained iron oxide, which produces a reddish-brown color. They were decorated with brown and cream slips, or underglazes, which are mixtures of water and clay that result in fine-line painting. The Moche used these three-dimensional bottles as painting surfaces.

The image on this vessel is of bean warriors, a common subject in Moche pottery. There are sixteen seated warriors, shown in profile and holding weapons such as spears and clubs. They wear crescent-shaped headdresses with fan-shaped ornaments. War themes appear throughout Moche art, showing men in fierce combat and capturing enemies. Warriors are depicted running or seated, as on this piece. The bodies of the warriors are probably shaped like lima beans—beans appear often on Moche works, and it is possible that they were used in a writing system, as game pieces, as medicines, and as food. Beans were the first crop planted in ancient Peru. Lima beans were cultivated as early as 2000 BCE in the Andes and were a common staple in ancient Peru. Potatoes, peanuts, corn, and squash were also grown using the irrigation canals that the Moche developed.

Use the following questions and discussion points while looking at the Moche Stirrup Bottle.

Have the students draw a bottle or vase shape on a piece of paper. Then ask them to decorate this bottle with images of North American warriors who were made of food plants.

What kind of clothes would they wear?

Use red and peach or cream-colored markers to resemble the slip colors used on the Moche bottle.

Students can supplement the warrior subjects with decorations that identify this piece as North American—include technologies that we use today, specific landmarks, etc. Have students imagine that this bottle would be found thousands of years in the future.

Will archaeologists know just by looking that this is an American object from the early twenty-first century?

Have the students show their works of art and point out an important detail or landmark that would help future historians identify this piece.