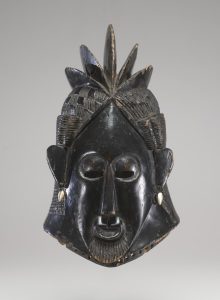 What does leadership look like? Explore VMFA’s African Art collection to see how different cultures define and visualize the qualities of a leader.

The Senufo [seh-noo-fo] people are mostly farmers and skilled artisans who live in the countries of Mali, Burkina Faso, and Cote d’Ivoire. This statue symbolizes Senufo beliefs about ancestry and ...

The Senufo [seh-noo-fo] people are mostly farmers and skilled artisans who live in the countries of Mali, Burkina Faso, and Cote d’Ivoire. This statue symbolizes Senufo beliefs about ancestry and community. The bird is known as “mother of the poro child,” associating it with the elders or “mothers” who act as guardians.

This statue symbolizes Senufo beliefs regarding ancestry and community. According to myth, the bird and four other primordial animals—the snake, the turtle, the crocodile, and the chameleon—were present with the first man and woman. Sometimes the bird itself is called “the first ancestor.” Two young birds perched on its winglike flanks introduce the theme of successive generations.

The animal represented in this statue is identified as a hornbill. Generally one male and one female hornbill will remain together as a monogamous couple and work in tandem to create a safe nesting site to lay their eggs. The nesting site is usually a hole in a tree or rocks. About a week before incubation, the mother hornbill will begin to build a wall of mud around the hole, leaving just enough space to enter. Once she is in, the father hornbill will finish packing the hole, leaving just enough space to pass food to her and the chicks. When the chicks and female are too big to stay in the nest, they break out. This nesting habit is a metaphor for rebirth or regeneration, which is well suited to the purpose of this mask and the poro society. The young men who mount these heavy statues on top of their heads are proud for successfully making it through the poro society and are ready to show off their strength to the community.

Discuss the function of this object. Can you think of any similar traditions you have in your family or community?

This helmet mask embodies the guardian spirit of the female Sande society (of the Mende People in Sierra Leone). It is worn as part of a costume that completely conceals the body of an elder of t ...

This helmet mask embodies the guardian spirit of the female Sande society (of the Mende People in Sierra Leone). It is worn as part of a costume that completely conceals the body of an elder of the women’s society who, when wearing the mask, is identified as sowei. Sowei is the guardian spirit responsible for educating the next generation of young women. The formal attributes associated with the sowei mask express ideals of goodness and beauty–high forehead, rings around the neck, downcast eyes, small pursed lips, and elaborate hairdo. The sowei mask is an unusual mask in Africa, for it not only represents a female spirit, but is danced by female members of the women’s society. Throughout the continent, most masks, even those representing women, are usually danced by men.

How does your culture idealize moral and physical beauty?

The Lega [lay-gah] people of the Democratic Republic of the Congo follow a lineage hierarchy called the Bwami Society. The Lega are located in eastern Democratic Republic of the Congo. One of the most remarkable aspects of this culture is its lack of centralized authority in the form of kings or chiefs. For them, cultural unity is maintained through Bwami, a moral and ethical society to which nearly all Lega men and women belong. Bwami consists of a series of grades that can be ascended through good personal character, family support, education, wealth, and initiation. These grades provide members with a series of lifelong goals that enable its adherents to “climb the slopes of the sky.” Bwami differs from most African initiation societies that focus on rites of passage at adolescence since Bwami members graduate to different grades throughout their lives. Bwami continues to reveal new secrets until the initiate dies. It is not a secret society per se, for everyone is aware of it; but the objects used to teach the association’s principles are maintained secretly by initiates of each grade, as is the knowledge of their configurations, handling, display, and interpretation. None but the most senior officials know which particular configurations and combinations of objects are appropriate at any given time.

Observe the materials on the various hats. What do the buttons tell us about the time period in which this hat was made?

The Yoruba [yoroo-buh] people of southwestern Nigeria have a long and rich tradition in bead making. The Yoruba have created—and continue to produce—some of Africa’s most dazzling beaded obje ...

The Yoruba [yoroo-buh] people of southwestern Nigeria have a long and rich tradition in bead making. The Yoruba have created—and continue to produce—some of Africa’s most dazzling beaded objects, notably royal regalia such as crowns, necklaces, footwear, footstools, and even entire garments. The use of these objects is reserved for important state occasions and public appearances. The Yoruba king is the head of a town and is often seen heavily adorned in elaborate and colorful clothing. Beads carry cosmic powers. Ancient Yoruba coral beads were dug from the sea and thought to attract the blessings of Olokun [olo-koon], the goddess of sea and wealth. When stranded together, beads stand for unity and togetherness, a message that a king would want to portray to his people. Oduduwa’s face is often seen on Yoruba royal regalia. In addition to being the first Yoruba king, he is also recognized as one of the primordial Orisa [or-ee-sha] or deities. His face on the slippers ensures that the wearer will see a clear path to walk and avoid “stumbles” along the way.

How is identity revealed through dress?

In the Cameroon, Bamum [bah-moom] kings have traditionally employed a variety of rich objects that symbolize sovereignty, such as this striking blue and white textile.

In the Cameroon, Bamum [bah-moom] kings have traditionally employed a variety of rich objects that symbolize sovereignty, such as this striking blue and white textile.

Bamum kings have long surrounded themselves with large, sophisticated visual displays that declare their economic, sociopolitical, and religious authority. These royal treasuries include various objects such as thrones, sculpture, masks, and textiles. This type of cloth, called ndop, was first patronized by Njoya, the renowned king of the northern Cameroon region during the late 19th century. This thirty-foot-long cloth is assembled from many thin strips of plain-woven cotton and then stitched together. The geometric patterns were created by applying cassava starch paste to ensure that some areas of the cloth would remain natural cotton and others turn deep blue when submerged in a vat of indigo dye. The ndop cloth became part of a complex court art that asserted power and independence and distanced the Bamum culture visually from colonial powers.

Ndop cloths became symbols of loyalty to the Bamum state during European colonialism. How might a textile represent loyalty?

This richly carved ivory scepter is one of many important symbols of a Kongo chief’s authority. It abounds with signs of his rank, which were invested with strict meaning and regulations of use. ...

This richly carved ivory scepter is one of many important symbols of a Kongo chief’s authority. It abounds with signs of his rank, which were invested with strict meaning and regulations of use. The top of the scepter depicts the chief seated on his throne. He holds a medicine horn in his left hand and chews on the root of a munkwisa plant to activate its curative power. Munkwisa, a plant of the ginger family, is used in medicinal brews. Its root, a sign of authority and purity, is used in investitures (ceremonies conferring authority) to assure that the chief’s power will grow from year to year. Atop his crown, a large knob of resin seals in earth and materials that have been packed into the head, signifying the king’s transcendental powers. The throne, the medicine horn, the root, the crown, and the earth all proclaim the chief’s importance as a spiritual leader. They also symbolize his role as a special type of nganga, one who has the knowledge and skills to control magical potions. Below the king is a sword-bearing figure, a court attendant who holds one of the king’s symbolic knives, another important element of royal regalia. Another reference to the chief’s greatness, a great bird astride an elephant, is carved on the front of the scepter. The elephant symbolizes his lordly status, and the bird stands for his power to transcend the earth. This detail has also been interpreted as an allusion to the myth of an elephant carrying the first queen mother to the land settled by the Yombe. The scepter ends in a point, like a larger staff that a chief may use to stab into the earth to invoke the protective spirit of the leopard. Completing the ornamentation are representations of cowrie shells, indicative of wealth, and a woman’s anklet encircling the lower portion of the scepter, manifesting a typical Kongo desire to balance male and female elements.

If you had to create an insignia for a ruler, what type of object would you produce? 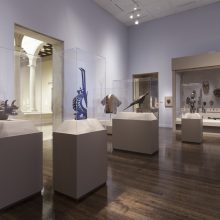 Before your visit to VMFA, introduce your students to the galleries. Let them explore the space and imagine what they can find there! ...