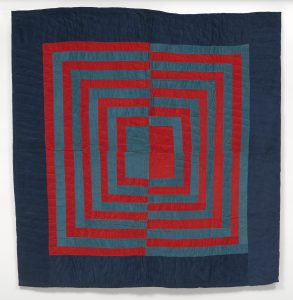 Drawing upon creative vision, patterns from the world around them, and African American quilting traditions, Gee’s Bend quilters have constructed some of the most iconic textiles of the American South. This Art in Depth explores these important artworks which showcase the creative intellect and artistic sensibility of their creators.

The Quilters of Gee's Bend 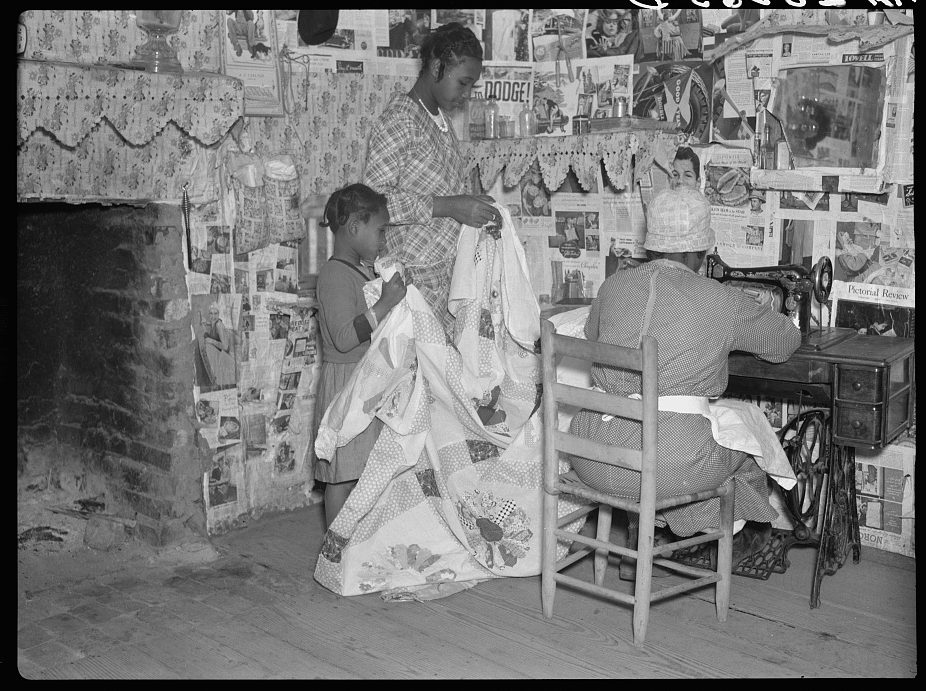 There have been hundreds of quilts created in Gee’s Bend, Alabama since the early 20th century, and these masterpieces have become some of the most iconic textiles of the American South. To create them, the quiltmakers of Gee’s Bend draw upon creative vision, patterns from the world around them, and African American quilting traditions, which have been passed down by generations of Gee’s Bend women. These traditions emerged from the necessity of keeping families warm in unheated quarters and homes, so the quilts were seen as functional objects rather than works of art. However, functional though they are, they are also imbued with meaning and full of bold compositions and skillful improvisations. These quilting traditions also showcase resourcefulness in materials with the use of recycled fabric remnants, feed sacks, and well-worn clothes. The visible stains, discoloration, and fading of these reclaimed materials all serve as reminders of the life the fabrics lived before they became quilts.

Gee’s Bend, later named Boykin, is located about forty-four miles southwest of Selma. Bounded on three sides by the Alabama River, it is both isolated and rural with a population of roughly 700 people. This geographical isolation has provided the area with a rare degree of cultural continuity. This is visually evident in the community’s extraordinary quilts which are renowned for their artistry and quality.

In the early 1800s, Gee’s Bend was the site of a cotton plantation owned by Joseph Gee from whom the area got its name. In 1845, Gee’s plantation was acquired by Mark Pettway who expanded the enslaved labor force in Gee’s Bend to over 100 people.

With the conclusion of the American Civil War (1861-1865) and the end of slavery, many of the emancipated people remained in the Gee’s Bend area and became tenant farmers. Today, the residents of Gee’s Bend are primarily descendants of enslaved workers and many still bear the Pettway name. 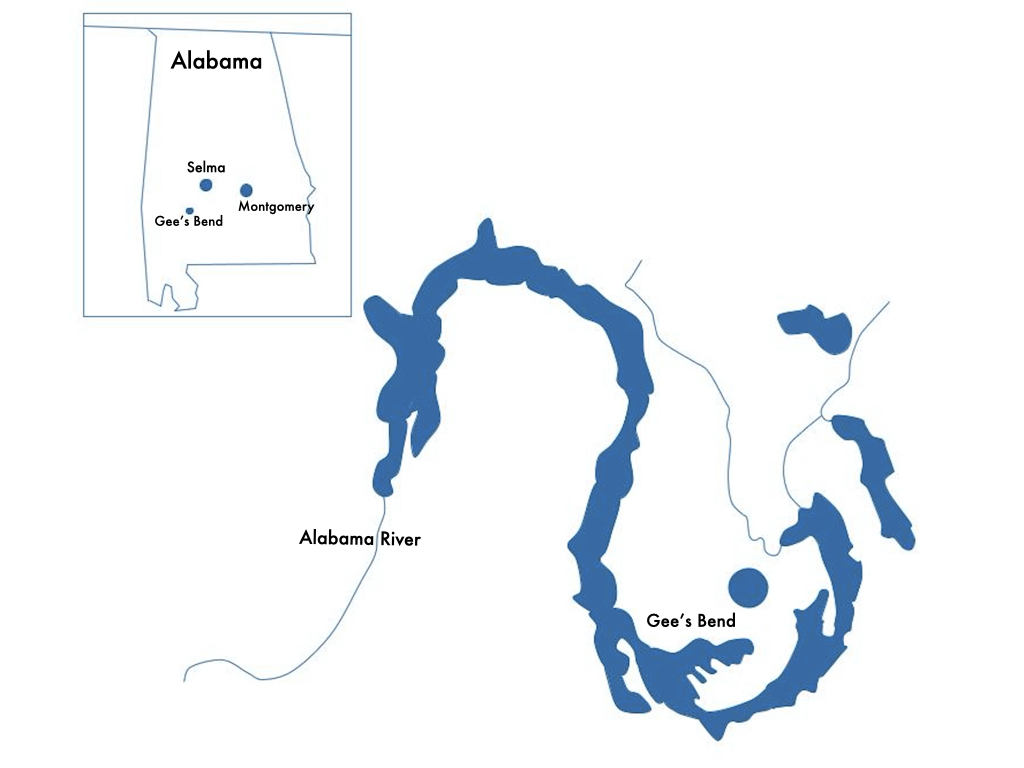 A Timeline of Gee’s Bend

Gee’s Bend quilting artists are renowned for their use of improvisation, a way of working in which the creator is open to artistic ideas as they come rather than depending fully on a set pattern or plan. Gee’s Bend quilters play upon color and form to create a sense of movement and visual rhythm in their quilts. VMFA curator Valerie Cassel Oliver has noted  “Like jazz, blues, and gospel music, and the spirituals from which they were born, the dizzying use of improvisation in the quilts spoke to the deep aesthetic visual tradition of the African American South.”

Visually, a “Housetop” quilt resembles what a roof looks like from an aerial perspective and is a type of quilt often seen in the Gee’s Bend tradition. It is a concept that the women of Gee’s Bend mastered and have made their own by experimenting with compositional structure. A “Housetop” quilt is constructed typically by joining rectangular strips of cloth to form frames. Each frame is bordered by a larger frame until the quilt reaches the desired size.

Quilts are often made of a series of individually patterned sections called blocks. “Log Cabin” is a quilting block pattern in which strips of fabric are sewn around a central square. Each strip is arranged perpendicular to the ones immediately adjacent to its shortest ends. In this way, the strips appear to rotate around the center. Often the colors of the strips are arranged to create a contrast of light and dark along a diagonal. The blocks can appear as many together on a quilt, or the entire quilt may be designed as a single large “Log Cabin” block. Sometimes, Gee’s Bend quilters incorporate traditional “Log Cabin” patterns into their “Housetop” compositions.

In the Virginia Museum of Fine Arts’ collection, there are eight variations of the “Housetop” and “Log Cabin” patterns made by Jennie Pettway, Linda Diane Bennett, Rita Mae Pettway, Louisiana Bendolph, Mary Lee Bendolph, Creola Bennett Pettway, Linda Pettway, and Loretta Pettway. These quilts present individual interpretations of these traditional compositions and embody the improvisational dynamic of Gee’s Bend quilts. Click through the slides below to examine the individual hand of each maker, and consider the artistic decisions she made as she worked.

The development of the Gee’s Bend quilters’ aesthetic has been greatly shaped by their embrace of available materials including discarded clothing and scrap material from other projects. Instead of being constrained by these fabric remnants, which often vary in size and sometimes offer limited color palettes, the Gee’s Bend quilters use the materials as a stimulus for their improvisational compositions. They create dynamic patterns punctuated by interrupted lines and pops of color. The use of recycled cloth may seem simply practical, but it is also incredibly meaningful. As quiltmaker Mary Lee Bendolph has noted, “Old clothes have a spirit in them.”

Click through the slides below to see how quilters Lucy T. Pettway, Nell Hall Williams, Louella Pettway, Nettie Young, and Ruth Kennedy have used the texture, color, and size of their materials to guide some of their designs.

On View at VMFA 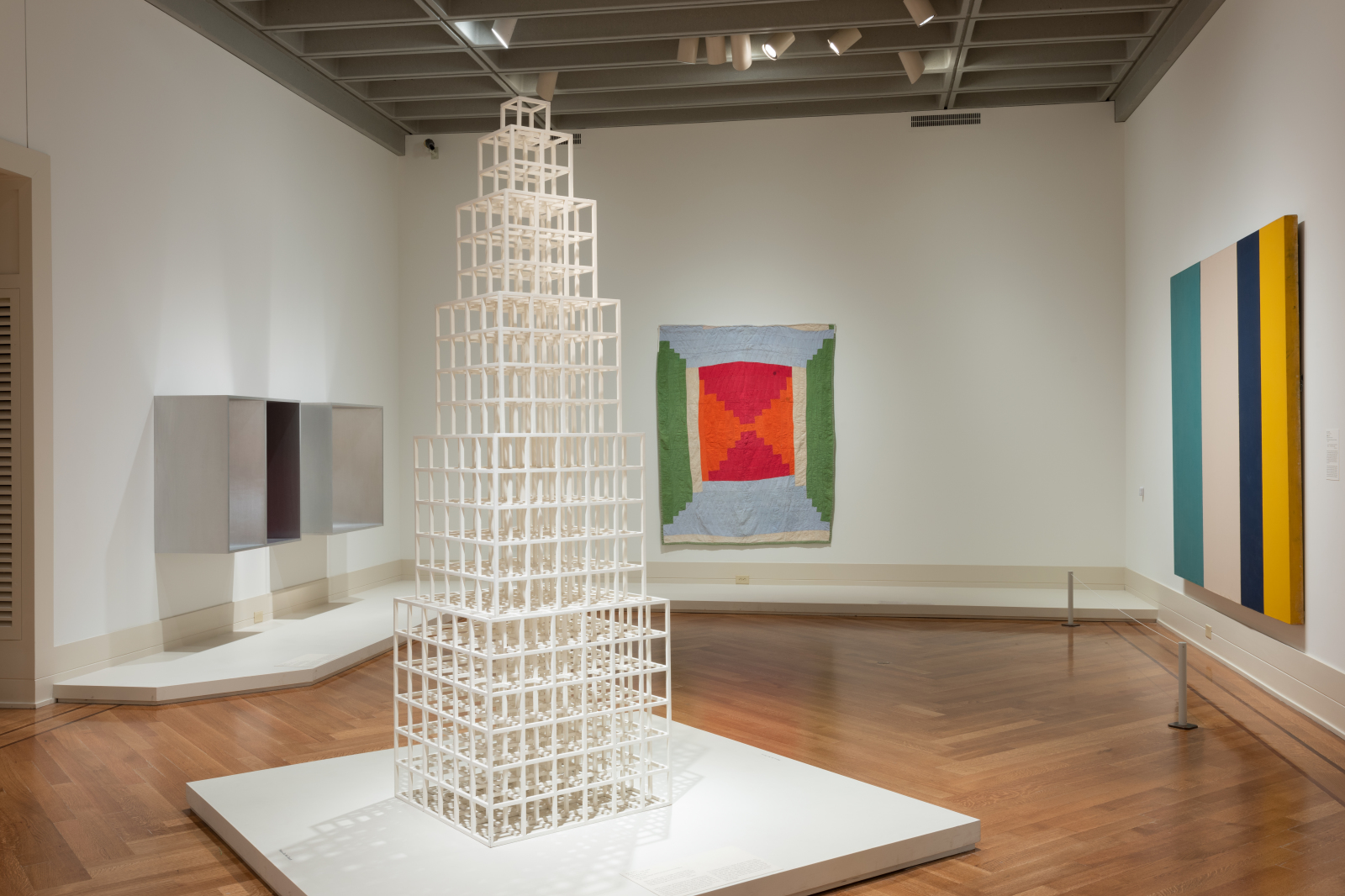 In 2018, thirteen quilts entered the permanent collection of the Virginia Museum of Fine Arts through the work of the Souls Grown Deep Foundation. The quilts, made between 1945 and 2006, were each created by a different Gee’s Bend artist, and they have become an integral part of the museum’s holdings of Modern and Contemporary Art. Their importance is intentionally highlighted in the galleries by featuring them alongside other key works of art. For example, some of the quilts are displayed, on a rotating basis, in the museum’s Lewis 20th Century Galleries where they can be found in visual conversation with works such as Brice Marden’s painting Meritatio or Sol LeWitt’s sculpture titled 1 2 3 4 5 6.

Consider this image which documents the display of Jennie Pettway’s quilt Housetop (single block) Courthouse Steps. In what ways does this display make sense to you? What curiosities arise?

Though Pettway’s artistic training differed greatly from the academically trained Marden and LeWitt, we can begin to recognize through this display that there are visual similarities and shared artistic sensibilities amongst their work that are worth exploring. Imagine if these three artists were to meet. What ideas would they share? Consider: