Explores the image and meaning of the Chinese dragon through writing exercises and art making. Use your imagination and create your own dragon!

Dragons figure in myths and legends from all over the world. In many of these cultures, dragons have characteristics of serpents or snakes that are combined with those of other creatures. Some cultures, particularly in the West, have viewed dragons as symbols of untamed wildness that must be conquered. Other cultures, such as those in East Asia, believed that dragons were benevolent and wise.

In China, dragons have appeared as important cultural symbols for at least six thousand years! Chinese dragons were seen as powerful and wise creatures with great spiritual powers. They were linked with authority and fertility—and they could bring wealth and good fortune to those who honored them.

Most scholars believe that Chinese dragons began as rain deities or spirits. In ancient Chinese myths and legends, dragons were usually connected with water and often lived in lakes and rivers. In many tales they were keepers of the clouds and winds, but they could also be fierce protectors of special places or treasures. The mightiest Chinese dragons were the Lords of the Oceans.

Yin and yang are two concepts that are also central to understanding ways of thought in ancient China. Yang is the active, male cosmic principle, which is associated with action, brightness and light, and the sun. Dragons are connected with the concept of yang, as are mountains. Yin is the passive, female cosmic principle. Yin is associated with non-action, darkness and the moon, and with the tiger and valleys. In Chinese tradition, the best conditions are ones in which yin and yang are balanced, each bringing something to the whole. The Chinese phoenix (or fenghuang), which is often a symbol of yin, is sometimes paired with the dragon to achieve a balance of yin and yang.

The dragon-like creatures that first appeared in Chinese mythology resembled snakes and were seen as omens of good or bad fortune. In later texts, they developed into creatures with the horns of a stag, the head of a camel, the eyes of a demon, the neck of a snake, the belly of a clam, the scales of a carp, the claws of an eagle, the soles of a tiger, and the ears of a cow.

These physical characteristics are taken from nine different animals. In ancient China, odd numbers were considered to be masculine—or yang, while even numbers were feminine—or yin. Nine is the largest one-digit odd number so it was viewed as the ultimate masculine number— and was therefore connected with the supreme power of the emperor.

Beginning as early as the Han dynasty (206 BCE–220 CE), Chinese rulers adopted the dragon as an imperial symbol. They ruled the “Land of the Dragon” from the “Dragon Throne.” During many of the dynasties that have ruled China, the Emperor alone could use the five-clawed dragon as his emblem. Four- and three-clawed dragons were worn by less important officials in those dynastic periods. 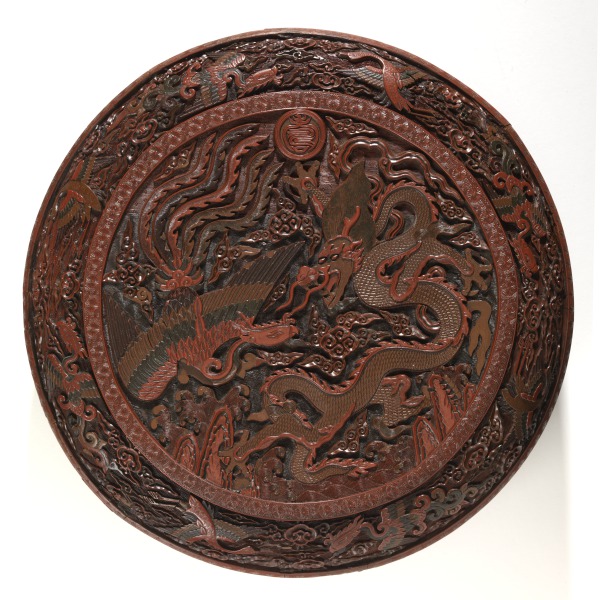 7. claws of an eagle

In this carved image, a Chinese phoenix, or fenghuang, is swooping down on the left side of the picture. It is peering up at the dragon, whose head is near the center of the box.

Create Your Own Dragon!

Have students sketch their dragon and think about the following questions:

Using paper, pencils, markers, and paint, ask each student to design a personal dragon. Have students present their finished dragons to the class!

Adaptation: Create dragons that can be cut out, folded, and manipulated—and then glued to a base so that they hold their shape. Ask students to consider colors, textures, and cast shadows as they make their dragons. There are many choices for both paper and base. Students can make textured paper by shaking kosher salt crystals onto paper that has been painted with wet watercolor or acrylic paint. (Work quickly to put the salt on before the paint begins to dry.) Cardboard, foam core, mat board, or any other fairly rigid material will work well for the bases, which can also be treated in a number of ways to produce a variety of textures, hues, and values.