Connect » VMFA Blog: Politics with a side of art 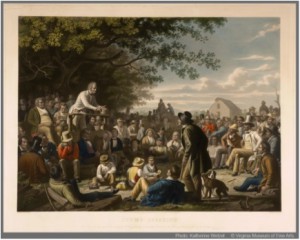 As this highly charged election season nears its end, a quietly reflective look at some topical and historical American art currently on view in VMFA’s galleries seems in order. This 1856 print after George Caleb Bingham’s Stump Speaking is a great place to begin. The image may be understood as a personal expression of the artist’s political experiences. Born in Virginia’s Augusta County, Bingham moved with his farming family to the Missouri Territory as a young boy. It was there he made his fame and fortune in painting and politics. As a Whig politician (the party formed in opposition to President Andrew Jackson’s Democratic policies), Bingham served one term as a Missouri state representative in 1848. Stump Speaking suggests the rational discourse and enlightened electorate the Whigs associated with their party. It also offers a pointed contrast to many of Bingham’s other animated scenes of mid-nineteenth-century American democracy in action. That many of those feature the boisterous enjoyment of hard cider—an enticement to literally multiple voters—makes the General Assembly’s resolution of next week as Virginia Cider Week even timelier.

Jacob Lawrence brought a more sober eye to the subject of voting in his 1974 print, The 1920s . . . The Migrants Arrive and Cast their Ballots. Echoing his famous visual narrative of the early-twentieth-century Great Migration, Lawrence pictures African Americans embracing the freedom to vote—an act then denied them in the South by way of poll taxes, tests, and violence. It’s humbling to be reminded through the medium of art of the importance of exercising this basic right. See you at the polls!