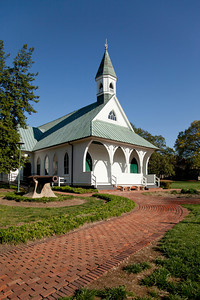 What’s going on?
In recent weeks a group calling itself Virginia Flaggers has undertaken a campaign asking that the Virginia Museum of Fine Arts mount Confederate battle flags on the Confederate Memorial Chapel. The endeavor has included demonstrations on site, blog postings, and contact with patrons, legislators, and media. The museum administration has recently met with a representative of this group to hear issues and opinions, to share its ongoing commitment to interpretation and stewardship of the Chapel, and to decline respectfully this request.

Background
In preparation for the commemoration of the Civil War Sesquicentennial, the museum undertook extensive research into the history of the grounds. A review of documents and images dating back to the time of the Soldiers’ Home (1885–1941)—and through subsequent decades after the Commonwealth assumed full ownership of the property in 1941—reveals that no flags hung from the Chapel. Battle flags were mounted on the facade when Lee Jackson Camp, No. 1, Sons of Confederate Veterans (SCV), began leasing the chapel in 1993. When renewing that lease in June 2010 and following a unanimous vote of its board of trustees, VMFA asked that the flags be removed—an effort that returned the historic structure to its original appearance.

Historic Interpretation
The museum takes seriously its responsibility, granted by the Commonwealth, to preserve the chapel and its place in postbellum history and has devoted extensive funding toward its care and maintenance. Moreover, VMFA is not only aware of the history of its grounds and period buildings (which include Robinson House and the former Home for Needy Confederate Women), but actively interprets the compelling story of the Robert E. Lee Camp, No. 1, through public tours, a link on its website, and outdoor signage.

In addition to the state historical marker and a bronze sign designating the site as the Confederate Memorial Park that VMFA placed on the grounds in the 1950s, three new illustrated signs were recently installed that mention this designation and tell the story of the Soldiers’ Home. A fourth sign near the Chapel, facing Grove Avenue, interprets the Confederate national flag. Before installation, the text and images for these panels were reviewed by leading Civil War scholars as well as representatives of Lee Jackson Camp, No. 1, SCV.

Confederate history and emblems are currently well represented at the Virginia Historical Society and the United Daughters of the Confederacy headquarters, institutions also situated on the grounds of the former Soldiers’ Home. The Confederate national flag is flown daily at the front of the United Daughters of the Confederacy building, and Confederate battle and national flags are currently displayed within the Chapel, where their historical significance is interpreted by local representatives of Lee Jackson Camp, No. 1. In direct response to requests by the Sons of Confederate Veterans, VMFA also installed a flag pole in front of the Chapel, where the Virginia state flag is flown. As is protocol for State agencies, it flies tandem with the flag of the United States of America.

In summary
As VMFA fulfills its primary mission to serve the Commonwealth as a world-class fine arts museum, it will continue to interpret the history of its grounds respectfully and accurately. With many members, patrons, trustees, and staff who share the heritage of the Old Dominion—including those with ancestors who fought for the Confederacy—we share the same interest in honoring those Virginians who gave their lives during that brutal conflict and will do our best to preserve an important part of Virginia’s history.