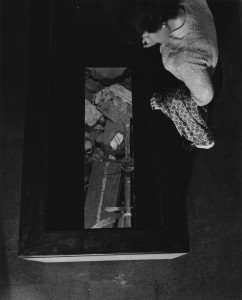 A visitor peers into the “tomb” of the former Egyptian Gallery.

Practically from the moment I arrived in Richmond, people asked me “Whatever happened to the mummy?” They didn’t remember his name – Tjeby – or when he was from (First Intermediate Period) but they all vividly remembered how he was displayed: you walked up a long ramp lined with Egyptian art, turned 90 degrees and looked down into a recreation of an Egyptian tomb. Arabic music helped set the atmosphere.

In telling me about the mummy, these museum-goers were telling me about a formative experience that helped create a life-long love and bond between them and VMFA. So many people told me about the mummy, that I began talking to colleagues and co-workers about why it was taken off view (our director at the time, Paul Perrot, felt it was an inappropriate display) and whether we should revisit the question of displaying what are, after all, human remains. After two years of discussion within and outside the museum, we decided that if we could find an appropriate way to display it.

Perrot’s objection to the old display was that it was more theatrical than educational, but the display was effective precisely because it was theatrical. I wanted to recapture at least a little bit of that theatricality, so one of the museum’s highly experienced designers created a dimly lit corner in the gallery with lighting in the mummy case that comes on only as you approach Tjeby (this lighting is also practical, since strong light could damage the mummy). Other material in the case gives a sense of the everyday objects that might have been found in Tjeby’s home and the labels in the case include excavation photography of the discovery of Tjeby’s tomb and explain some of the history and methods of archaeology. This seemed like both a dramatic and educational way to discuss ancient Egyptians concern for the afterlife, a central aspect of their culture.

The true test of the display came when Paul Perrot paid a visit to the museum and asked for a tour of the Egyptian gallery. I was nervous; after all, he had decided that we should not display the mummy. To my great relief, however, he gave our new display the nod of approval and told me that if we had displayed the mummy in this manner in the past, he would have had no problem with it.
I must confess a secret, though. While it is true that nothing inspires like a good mummy, what most intrigues me about the current installation of the mummy are the objects on the back wall: a pair of wooden sandals and a bronze razor. Imagine, a four-thousand year old razor!