Cast in bronze more than one hundred years ago, VMFA’s statue of Thomas Jefferson by Moses Ezekiel depicts the young statesman reading aloud his draft of the Declaration of Independence for the first time in the summer of 1776. The statue is a smaller version of the grander monument you’ll find on the plaza in front of the Rotunda of the University of Virginia (UVA), which was designed by Jefferson. 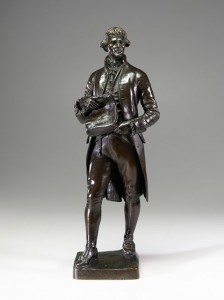 Thomas Jefferson by Moses Ezekiel is on display in the James W. and Frances G. McGlothlin Galleries of American Art

Though Ezekiel left the United States in 1868, and only rarely returned, he created important sculptures and monuments for patrons in the United States for several decades. Born into a Jewish family in Richmond, Ezekiel became the first Jewish cadet at the Virginia Military Institute (VMI) and fought for the Confederacy at the Battle of New Market. As a student of the Royal Academy in Berlin, he became the first foreigner to win the school’s prestigious Prix de Rome, which allowed the young artist to study Classical sculpture in the Italian city. Ezekiel lived in Rome for the remainder of his of life, establishing a studio in the soaring domed ruins of the ancient Baths of Diocletian.

Thomas Jefferson was Ezekiel’s personal hero. In addition to writing the Declaration of Independence, Jefferson was the author of the Virginia Statute for Religious Freedom, an important guarantor of civil liberty that later influenced the First Amendment of the U.S. Constitution. As a Jewish American, Ezekiel greatly admired the precedent established by Jefferson. On the Jefferson monument at UVA, Ezekiel included an inscription from the Book of Leviticus in the Bible: “Proclaim Liberty Throughout All the Land Unto the Inhabitants Thereof,” along with allegorical figures representing Freedom, Equality, Justice, and Brotherhood (Religious Freedom). Ezekiel’s striking likeness of Jefferson conveys his affinity for the man who was also a Virginian and an artist.

The author would like to thank Dr. Elizabeth O’Leary, former VMFA  Associate Curator of American Art, for her previous research on the subject.