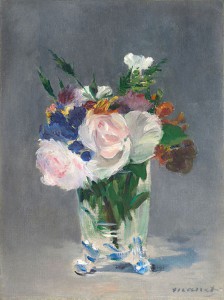 Born January 23, 1832, French painter Édouard Manet was one of the first 19th artists to use the modern world as the subject of his art. “I paint what I see and not what others like to see,” he said.

While the striking honesty in his subject matter, including prostitution, drinking, and war, scandalized the French Salon public, his work was received enthusiastically by the young painters who would create impressionism. As a result, Manet was considered a vital influence in the transition from realism to impressionism.

Along with painting urban scenes in the 1860s, the groundbreaking artist also painted floral still lifes. He returned to this subject matter during the year he lay dying (1882 to 1883), because the world around him had shrunk to include little more than the beautiful flowers his friends brought to his bedside. Flowers in a Crystal Vase, a work not exhibited in the artist’s lifetime but one of the key works in VMFA’s upcoming exhibition Van Gogh, Manet, and Matisse: The Art of the Flower, opening March 21, demonstrates Manet’s intensely personal and intimate vision.

Manet’s final series of flower paintings had a profound influence on the artists of the
impressionist circle, informing the rich experimentation in the genre during the early to
mid-1880s. That impact will be evident in the dozens of paintings in The Art of the Flower