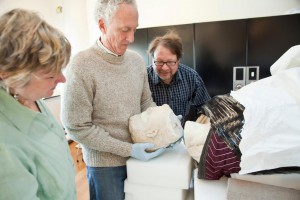 Nearly two-thousand years after his brutal assassination by members of his own bodyguard, Emperor Gaius Julius Caesar Augustus Germanicus (popularly known as “Caligula”) has lost his head yet again in an operation performed over the course of several months at the Virginia Museum of Fine Arts. The operation was performed on a full-length marble statue of Caligula now in the VMFA’s ancient art collection and resulted in the successful separation of the head from the body. The museum will now be able to determine definitively whether the head and body were originally part of the same sculpture and reattach the head with a more accurate alignment than had been done in previous restorations. Following present-day best practices in conservation, all work done on the statue will be fully reversible.

The work took place in VMFA’s Sculpture and Decorative Arts Conservation Studio by Amy Fernandez and Greg Byrne under the supervision of VMFA’s conservator and department head Kathy Gillis with curator Peter Schertz consulting. Using steel wire and a solution of water and ground pumice, and later piano wire treated with diamond dust, Ms. Fernandez and Mr. Byrne carefully sawed through the epoxy used to reattach head the body the last time the statue was conserved. They also cut through a copper rod that had been used to stabilize the head.

The emperor was popularly known as “Caligula,” a nickname given him by members of his father’s army when Gaius was but a lad. He became Princeps, or first citizen, of the Roman Empire in 37 CE, following the death of his uncle Tiberius. Initially hailed as “our baby” and “our star” upon his ascension, Caligula soon found himself at odds with the Roman senate and wide swaths of the population. Despite a successful military campaign against the god Neptune, Caligula was never able to regain his early popularity. On 24th January 41 CE, members of the Praetorian Guard under the leadership of Cassius Chaerea assassinated Gaius. Although not condoned by senatorial or imperial decree, images of Caligula throughout the empire were soon defaced and destroyed; today only two of the thousands of statues made of Caligula survive intact, one in Richmond, VA at VMFA and the other at Gortyn, Crete, in the local antiquarium.

Upon Caligula’s death, the Praetorian guard hailed his uncle, the stuttering, limping scholarly historian Claudius as Princeps. Faced with the swords of the Praetorians and threats of public disorder, the Senate quickly granted Claudius the powers and honors of Princeps and Claudius was no less quick to pay the faithful Praetorians their promised bonus of 15,000 sesterces per soldier.