Connect » Art of the First World War Remembered at VMFA 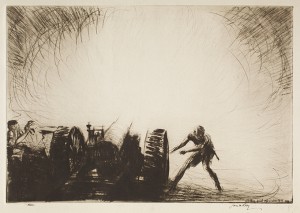 VMFA is among the first art museums in the United States to commemorate the centenary of the start of World War I with its exhibition THE GREAT WAR: Printmakers of World War I (on view now through November 11, 2014). Comprising more than 28 works on paper by European and American artists, THE GREAT WAR considers the role of prints in portraying the preparations, combat, and aftermath of World War I.

One hundred years ago on July 28, 1914, and one month after the assassination of Austrian archduke Franz Ferdinand and his wife, Sophie, in Sarajevo, Austria-Hungary declared war on Serbia. The ensuing bombardment of Belgrade formed one link of the entangled chain of international disputes that escalated into the far-reaching conflict known as “The Great War.” Soldiers and civilians across more than 40 countries became engulfed in mechanized and chemical warfare that left in its wake unprecedented casualties and ruin before the armistice on November 11, 1918.

World War I bore little resemblance to all previous wars. Perhaps because of its shocking unfamiliarity, this all-encompassing war inspired artists — especially those who served among the ranks of the military. 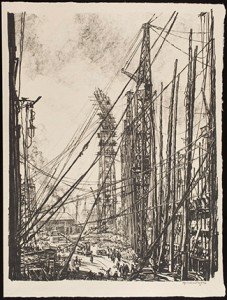 A visit to any one of VMFA’s encyclopedic collections illuminates how combat has intrigued and challenged global artists for millennia. Artworks may document, obscure, commemorate, or protest war. Within the history of European art, battle scenes and portraits glorifying military leaders are often combined with noble allegorical themes. In the nineteenth century, these subjects constituted a well-established military art genre in the juried exhibitions of the Académie de Beaux-Arts in Paris and Royal Academy in London. VMFA’s European art galleries attest to the historic popularity, and often polish, of war art.

In the decades prior to World War I, many British artists featured in THE GREAT WAR such as Muirhead Bone, James McBey, George Clausen, and William Strang, enjoyed successful careers as painters and printmakers; however, their work did not represent military subjects. As Great Britain expanded its conscription and propaganda campaigns, select British artists took up a special task:  to create a visual record of the war. In 1916, Wellington House, the official War Propaganda Bureau of Great Britain, hired Muirhead Bone as the first “official war artist” to use fine art to promote the government’s perspective on the conflict to Allied and neutral nations. Bone and the men mentioned here documented the war along the Western Front, where the deadliest conflicts were waged. THE GREAT WAR examines how “official” works of art also capture varied personal sentiments and experiences of endurance, sacrifice, camaraderie, trauma, patriotism, and even pacifism, derived from the artist’s direct exposure to combat. 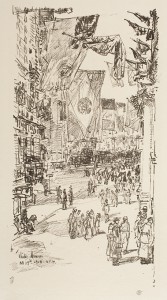 When the United States entered the war in the spring of 1917, American artists were recruited to assist with and record the activities of the American Expeditionary Forces. Kerr Eby applied his artistic skills as a camofleur — a designer of defensive camouflage for soldiers and artillery — but also produced a series of etchings depicting the drudgery of the trenches  and suggest his increasing disenchantment with war and pacifism. THE GREAT WAR includes three of his etchings of the action. In contrast, Childe Hassam, a New York-based impressionist painter who never saw combat, depicted the flag-festooned American home front and its strong support of Allied efforts.

THE GREAT WAR thus presents a timely occasion to examine how Virginians memorialized the war. The Carillon, a 240-foot Colonial Revival bell tower and the first World War I monument built in Virginia, stands just two miles south of VMFA in Richmond’s Byrd Park.  Two historic postcards of this impressive memorial — one of which is an imaginative rendering — appear in the exhibition.

To learn more about the Carillon and other ways in which American artists and architects memorialized the war, please join Dr. Elizabeth O’Leary, former VMFA Associate Curator of American Art, and Jessica Witek, MA, at the talk Over Here: Responses to World War I in Art and Architecture.